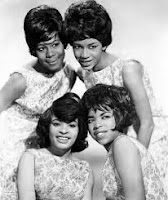 I was wondering what to use as a TBT this week, and the PA system at Key Food gave me the answer with this 1961 hit, which I first heard on the juke box in the "cafetorium" at Robinson High School in Tampa at the beginning of my 10th grade year. The other songs I remember from that time are "Limbo Rock" by Chubby Checker and "The Lion Sleeps Tonight" by the Tokens. The last is the title of an essay by the South African writer Rian Malan, which gives a history of the song, and which I'll post about sometime soon.

Posted by Claude Scales at 12:26 PM No comments:

The tall ship Peking will be leaving South Street Seaport to return to Hamburg, Germany. This is good. 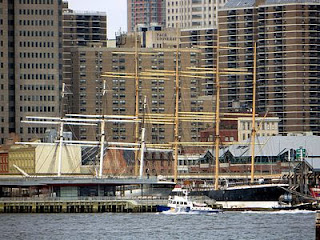 The bark Peking, her tall, buff painted masts reaching the height of at least some lesser buildings on the lower Manhattan skyline, and a dominant feature seen from across the East River, from Brooklyn Bridge Park, where this photo was taken, has been a presence since a few years after I moved to New York.. Launched in 1911 at the Blohm & Voss shipyard in Hamburg, Peking was one of the largest steel hulled sailing ships ever built, and one of the last large cargo sailing ships.

In 1933 Peking was taken out of service and sold to an English charity for use as a school for boys. She was renamed Arethusa, and anchored in the River Medway, where she remained until 1975. That year she was purchased by the South Street Seaport Museum, brought to New York, and put on display at Pier 16 on the east side of lower Manhattan.

The museum also owns another tall ship, Wavertree, whose white masts and bowsprit can be seen in the photo in front of Peking. Over the years, the cost of keeping two tall ships in good condition has proved a drain on the Museum's finances. Wavertree is now in drydock undergoing extensive maintenance and renovation, which I hope will include installation of her topmasts and spars.

News has now come that, thanks to funding by the German government, Peking will return to her first home, Hamburg, to serve as a floating museum there. This seems most appropriate to me, as Peking had no historical connection to New York, her trade routes having been mostly between Australia or South America and Germany.  Wavertree, by contrast, was in tramp service, and likely visited New York a number of times.

I'll miss those tall buff masts and that sleek hull, but I'm glad that Peking is going home, and that the Museum will be spared the cost of maintaining her and can concentrate on Wavertree and the other vessels in their collection.
Posted by Claude Scales at 11:36 AM No comments: