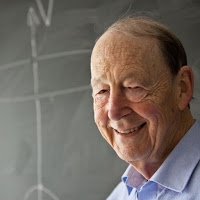 In a 2012 post about the then discovery of the Higgs boson, a particle the existence of which was first theorized by several groups of physicists, I noted that, but for timing of publication, the elusive particle might have been called the Kibble boson. The story is a bit more complicated than that. It's true that in 1964 Tom Kibble, then and until his death on June 7 of this year a member of the physics faculty at Imperial College London, and his American collaborators, Gerald Guralnik and Richard Hagen, published a paper that, according to The Guardian's obituary, "demonstrated how particles that transmit nature’s fundamental forces, and which on general theoretical principles should be massless, can nonetheless gain mass." Why is this a big deal? It's because, if the "general theoretical principles" preferring masslessness prevailed, the universe would be very unstable.

Unfortunately for Kibble and his collaborators, two other papers--one by the Belgian physicists Robert Brout and François Englert; the other by Peter Higgs himself--stating essentially the same theory were published earlier that summer. Higgs also posited the existence of a mediating particle, which became known as the "Higgs boson". A boson is an elementary particle that conforms to certain requirements set out in the Standard Model physicists have developed over the past half century to explain the "fundamental structure of matter" (for a more complete explanation, see the CERN website linked immediately above).

The existence of the Higgs boson wasn't confirmed until 2012. The following year, Higgs and Englert (Brout had died, and Nobel prizes aren't awarded posthumously) shared the Nobel prize for physics. In the Guardian story linked immediately above, Kibble is quoted:


My two collaborators, Gerald Guralnik and Carl Richard Hagen, and I contributed to that discovery, but our paper was unquestionably the last of the three to be published ... and it is therefore no surprise that the Swedish Academy felt unable to include us, constrained as they are by a self-imposed rule that the prize cannot be shared by more than three people.

My sincere congratulations go to the two prizewinners, François Englert and Peter Higgs. A sad omission from the list was Englert's collaborator, Robert Brout, now deceased.

The discovery of the Higgs boson wasn't the only work to which Kibble contributed that led to a Nobel Prize. The 1979 award to Abdus Salam, a fellow Imperial College faculty member, along with the Americans Steven Weinberg and Sheldon Glashow, as well as the 1999 award to Gerardus 't Hooft and Martinus J.G. Veltman, were made for work that drew on insights of Kibble's.

He was, in full, Sir Thomas Walter Bannerman Kibble, but he is almost always simply called "Tom", and that's how I'm sure this brilliant but hard-working and humble man liked it.

Posted by Claude Scales at 11:09 PM No comments: