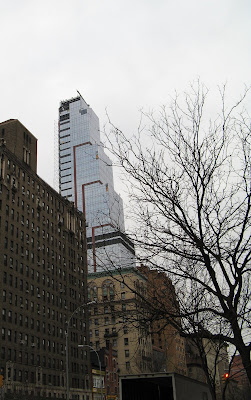 This afternoon I took my daughter to a friend's place for a sleepover. On my way back to the subway, I spotted this nearly completed building at Broadway between 100th and 101st Streets.

I can only surmise that this monstrosity is the result of a "bad architecture" contest, something like those Bulwer-Lytton contests for writers. If I were a real estate broker trying to sell condos in this thing, the best selling point I could think of is that if you live in it, you're assured of not having a view of it from your window.
Posted by Claude Scales at 9:53 PM 4 comments:

The caption is, of course, from Emma Lazarus' poem, The New Colossus (see here), but this isn't a screed about immigration. Instead, it's about people among us now, regardless of citizenship or residency status, who we too often regard as, simply, trash.

I'll begin by recommending another blog, Nurse Ratched's Place, written by Mother Jones, R.N., a psychiatric nurse. She mixes perceptive social commentary, focusing, of course, on health care issues, with sprightly reviews of the fiction genre that could be called "nurse lit". What I'm linking to here is in the former category. MJ doesn't harangue us in her post; she doesn't propose any changes in social policy. She just tells a story and lets us draw whatever conclusions, if any, we might. She also gives us a powerful simile; one to which an architecture buff like me can easly respond.

Shortly after reading MJ's post, I came across a long discussion on MSNBC of the horrifying Kendra Webdale incident. Back in 1999, Kendra, a young woman who had recently moved to New York City, was pushed to her death under a subway train by Andrew Goldstein, who had been diagnosed as schizophrenic and had a long history of violent behavior. A condensed account of the MSNBC piece, by producer Lee Kamlet, is here.

It may seem quite a leap from the harmless bag lady of MJ's story to Andrew, whose "voices" led him to kill, but both may be susceptible to the same diagnosis, and each has been a client of the system provided by a great city and state to help those in such circumstances. It appears that the bag lady's experience with the Chicago system was satisfactory, though she may simply have been lucky to have been delivered into MJ's care rather than that of someone less compassionate. By all accounts, Andrew's experience was much less successful.

The question of what shall we do for, or with, people like MJ's bag lady and Andrew used to be answered like this: if they seem dangerous to others or themselves, or even if they seriously disturb the public peace (and assuming they don't have family who can afford private care), they should be put away in facilities that will offer them treatment as well as separating them from the rest of us. In accordance with the principle of economy of scale, these were usually very large complexes in relatively isolated places. During the late 1970s, I worked for a time as an in-house lawyer for the electric and gas utility company serving Rockland County, New York, on the west side of the Hudson north of New York City. On my way to work, I would drive past one of these facilities, Rockland State Hospital, consisting of a number of large, forbidding looking buildings scattered over perhaps a square mile of land. One of the engineers at the utility company told me that, back during the 1950s, he noticed a spike in electric demand every Wednesday afternoon. When he inquired about the reason, he found out that this was when inmates at Rockland State were administered electroconvulsive therapy.

This system began to be questioned seriously in the 1960s, perhaps as a result of the civil rights movement's having focused attention on misuse of state power over individuals. At the end of that decade, Frederick Wiseman made the infamous film Titicut Follies (see here), which exposed the horrors of a Massachusetts asylum. The resistance to the continued "warehousing" of those with mental illness resulted in stronger legal constraints on commitment to institutions, as well as efforts to establish halfway houses and clinics for outpatient care. Unfortunately, these last too often proved inadequate, as the history of Andrew Goldstein attests.

Why have we, as a polity, resisted providing adequate services for these people, even though we could thereby avert many tragedies such as that of Kendra Webdale? I think several factors are involved here. Consider the first comment, by "Mike", offered in response to Lee Kamlet's article linked above, and which (to save you having to reopen the link) I've reprinted verbatim below.

A terrible crime comitted by a mentally unstable human being, which ultimately leads to a new law and an increase in tax payers pockets, because the sick person needs our help? My heart goes out to the family. I would not help any criminal, I would send them all to death row. The fact that this happens in a large city is not the surprise, the fact that more security is needed in subways after dark is no surprise either.I hope people find ways to get smart in this century. Perhaps with less denial and more assertive inteliigence, the country and it's cities will do what is right for themselves, even if it means getting tougher. With the population growing, ego's inflating, self-involvedment & selfishness overwhelming,there are people who are basically worthless, so it's time for those who are able to make positive changes for the country do so, step up, and make it happen. Is this you?

This comment seems to me to exemplify what Philip Slater calls the Toilet Assumption, which, along with its Janitorial Corollary, is succinctly defined by Todd Gitlin in his introduction to the second edition of Slater's The Pursuit of Loneliness - American Culture at the Breaking Point, here. Note the statement, "there are people who are basically worthless," indicating that "Mike" considers Andrew Goldstein, and those like him, as, effectively, shit.

Beyond that, and alluded to by "Mike's" reference to "taxpayer pockets", is, I believe, a fundamental sense of mistrust, both of the putative recipients of tax-funded assistance, who are seen as somehow gaming the system, and of the "experts" who propose to assist them, who are seen as seeking to build unnecessary bureaucratic empires at public expense. This is a topic I will address further when I belatedly join in the "just society" conversation so ably begun by El Cabrero and furthered by Hipparchia.

Goldstein was crazy alright! Crazy like a fox. He had the wherewithal to plan the attack, someone was going to be pushed. He should be made to feel what Kendra must have felt, sheer terror, in the moments as she tumbled before the train. Nothing the mental health society or criminal justice system could ever come close.

(Incidentally, the comments responding to Kamlet were, by I'd say a three-quarters majority, not in the vein of those by "Mike" and "Sickofitall".) While this comment alludes to the mistrust I mentioned above ("Crazy like a fox"), it also points to a third factor in play here. That is the fear that even recognizing the possibility that such a dreadful act as the killing of Kendra could arise from mental illness rather than rational calculation somehow makes her death more terrifying, because of its apparent randomness. It also puts us on a slippery slope leading towards anomie and the negation of free will. While these are not, on their face, arguments against providing appropriate treatment to the mentally ill, they do, I think, underly a wish to ignore the problem. (I'm not much of a fan of slippery slope arguments, except in those rare instances where I can use one against something that I or a client of mine wants to derail. On the whole, I'm confident that the appropriate lines can be drawn, so long as the line-drawing is left to reasonable people like me.)

I don't believe that "Kendra's Law", as enacted in New York and in similar versions in many other states, is enough. It may well be preventing some Kendra-type tragedies from happening, but I suspect that a more fundamental overhauling of the mental health care delivery system is needed. It won't be easy, as it will demand scarce resources as well as balancing considerations of public safety and individual civil liberties. But it should be done.

Addendum: On re-reading, I realize that the parenthetical at the beginning of the penultimate paragraph above, concerning the tone of the majority of the comments on Kamlet's article, seems to undermine the contention that the reason it is politically difficult to provide an effective mental health system is the prevalence of attitudes like those expressed in the comments I quoted. I think the answer is that many of the "positive" comments came from mental health professionals, or from people who either themselves had experienced mental illness or had someone close to them experience it. The responses to Kamlet appear to have come mostly from two self-selected groups: those with a stake in improving the system, and those strongly opposed to doing anything for the likes of Andrew Goldstein beyond locking them up and throwing away the key. While I don't believe the majority of Americans would express their views on this matter in quite the stark terms that "Mike" and "Sickofitall" did, I suspect that those two comments are closer to the "average" view than those of the majority of the commentors on Kamlet's article.

New and improved addendum, complete with correction: TenaciousK (click on "comments" below) confirms something I suspected; that the story about the spike in electrical demand caused by ECT is a myth. I guess the engineer was just pulling my leg ("That new corporate lawyer, Scales? Dumb as a post. Got him to believe that old saw about electroshock at Rockland State causing a demand peak."). The rest of TK's "rant" is well worth reading.
Posted by Claude Scales at 11:33 PM 5 comments: 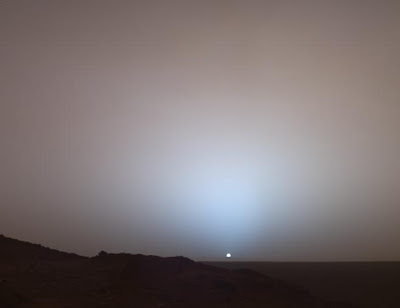 Photo by the "Spirit" Mars rover, from NASA/JPL's Mars exploration rover site, thanks to a link from Cosmic Log.