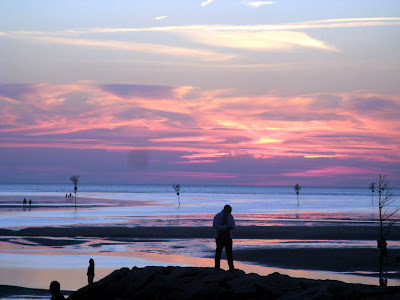 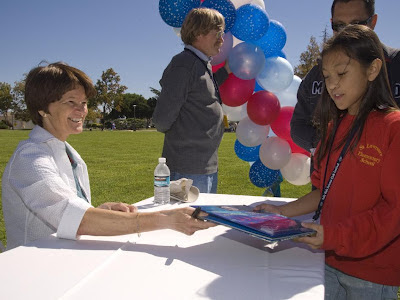 In the crush of a hectic schedule last week, I missed the sad news of Sally Ride's death, at 61, from pancreatic cancer. She wasn't the first woman in space. That honor belongs to Valentina Tereshkova. Still, I admired Ride's easygoing charm, and commend her double major in English and physics, perhaps a personal attempt to transcend the divide described by C.P. Snow in The Two Cultures. (Photo: NASA)

Happier news is the discovery of a fifth moon of Pluto. Six years ago I noted, a bit wistfully, Pluto's demotion from tenth ninth (thanks paulo1 for catching my error) planet to "dwarf planet" status. While its having an additional satellite doesn't change that classification, it does show that the little devil still has a surprise or two in store.

A sail on Cape Cod Bay 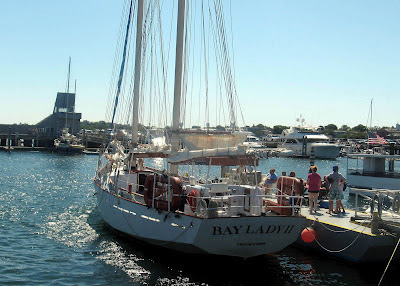 Last weekend we were guests of our friends at whose Cape Cod house we welcomed the New Year. On Sunday, we drove from our friends' place in Orleans, just past the Cape's "elbow," out to Provincetown, at the far end of the peninsula. "P-town," once a quiet fishing port and artists' colony that attracted a large gay community, a New England analogue to Key West, has, like Key West, become a tourist destination with lots of shops selling t-shirts and souvenirs made far away. Still, there are some places worth visiting, as our friends showed us, including an almost claustrophobia-inducing used book store, and a little tavern called The Squealing Pig, where we all started our lunch with bewitchingly briny Wellfleet oysters, which I followed with a heaping platter of haddock and chips, washed down, serially, with a Whale's Tail Pale Ale from Nantucket, and a Fisherman's Ale from Gloucester, not far from my wife's home on Massachusetts' North Shore.

After lunch we took a walk on one of the long piers that extend into Provincetown harbor. Our friends recommended a sail on the two masted schooner Bay Lady II (photo above), to which we eagerly agreed. 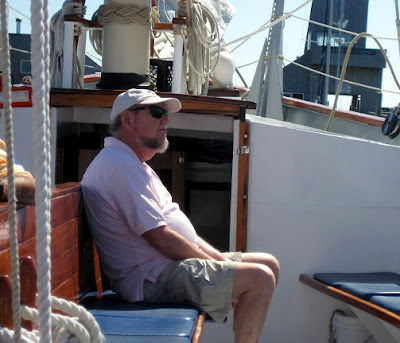 Your correspondent looks pensive as the crew prepares to cast off (photo by M. Foley). 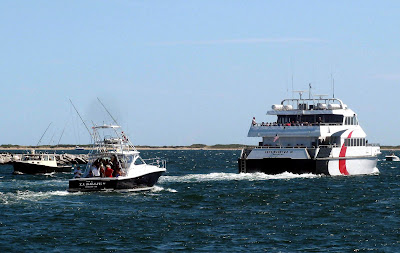 We left the pier under auxiliary motor power, and headed out of the harbor behind the high speed Provincetown to Boston ferry and a sport fishing boat. 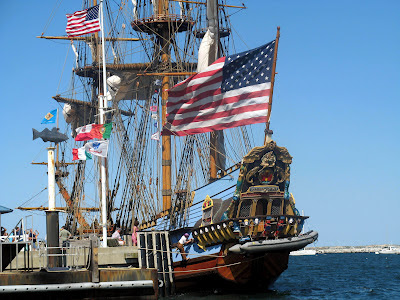 Moored at the end of the pier was Kalmar Nyckel, the official tall ship of Delaware, a replica of the ship that brought the first European settlers--Swedes and Finns--to the Delaware Valley, where, arriving in 1638, they established a colony called New Sweden at the site of what is now Wilmington. Their leader in this venture was the Dutchman Peter Minuit who, on an earlier visit to North America as an agent of the Dutch East India Company, was credited with purchasing Manhattan from the indigenous Native Americans. Kalmar Nyckel is visiting Provincetown, and will return to her home port of Lewes, Delaware after August 4. 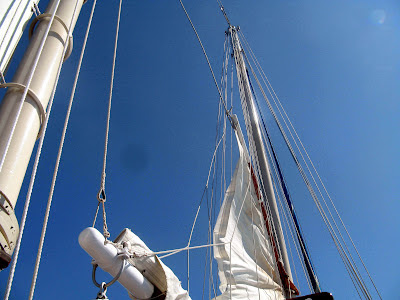 After we cleared the breakwater, the sails went up and the engine was shut down. Here's the foresail being raised (photo by M. Foley). 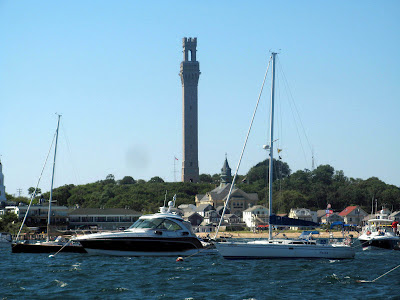 Looking landward, I could see the Pilgrim Monument, an Italian style campanile that commemorates the arrival of English venturers (only later called "Pilgrims") aboard the Mayflower in 1620. Mayflower's first New World anchorage was in what is now Provincetown harbor, and the Mayflower Compact was signed there. 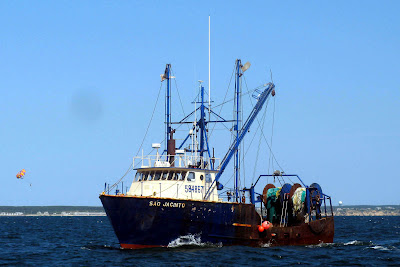 As we left Provincetown harbor, the trawler Sao Jacinto was coming in. Many fishing vessels based at southern New England ports have Portuguese names, reflecting substantial immigration from Portugal proper, the Azores, the Cape Verde Islands, and Brazil into the region, beginning in colonial times. 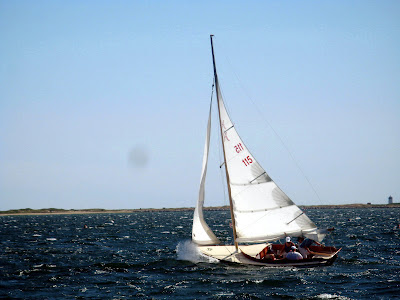 Off to our starboard, a small sloop was coming about on a tack. 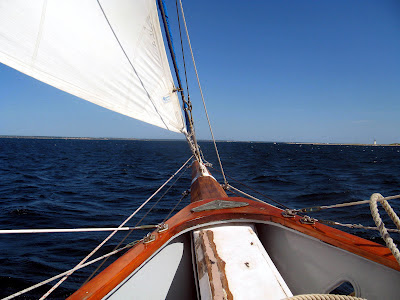 The view from the bow, looking forward. There was about a twenty knot breeze coming from the east, towards our bow on the outward leg of the voyage, and I got wet a few times as we plowed into approaching seas. 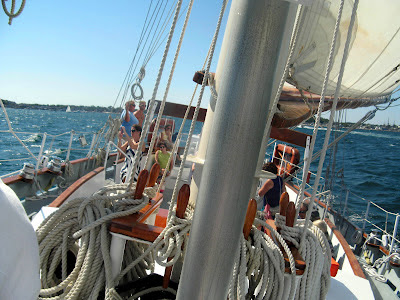 The view from the bow, looking aft. 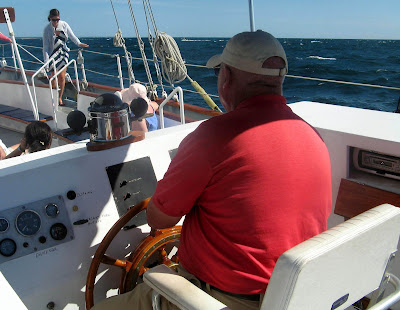 The view at the stern;  Captain Bob Burns is at the wheel. 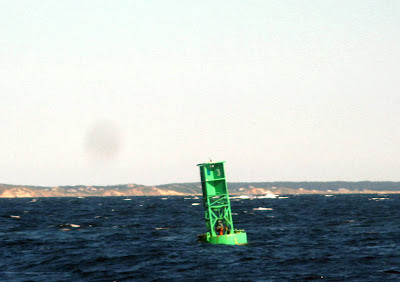 Returning, we passed this green bouy. The bluffs behind are in Truro. 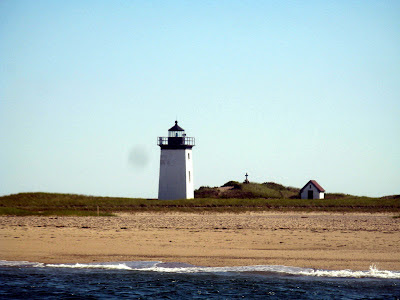 On our way back into Provincetown harbor, we passed Long Point Light. 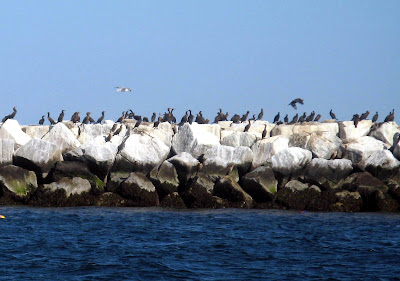 Cormorants were resting on the breakwater, while a gull glided above. I got a close-up of a cormorant four years ago in what is now part of Brooklyn Bridge Park. 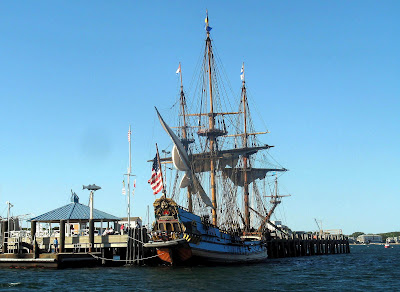 Approaching the pier, we got another view of Kalmar Nyckel. All in all, a delightful afternoon's voyage.
Posted by Claude Scales at 2:33 PM No comments: