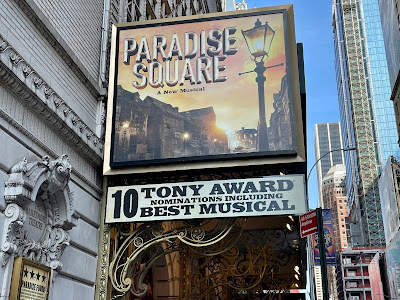 If the name Joaquina Kalukango isn't familiar to you, as it wasn't to me until a few days ago when she was nominated for the Tony Award for Best Performance by an Actress in a Leading Role in a Musical, be assured that if you're even mildly interested in Broadway, or theater in general, it will be. In Paradise Square, nominated for Best Musical, she plays Nelly O'Brien, Black wife of Irish immigrant Willie O'Brien (Matt Bogart). Willie and Nelly are owners of a saloon called Paradise Square, situated in what was in the mid nineteenth century a notorious Manhattan slum called Five Points.

When the show begins, Willie has left and joined the Fighting 69th, a U.S. Army regiment formed during the Civil War and made up entirely of Irish immigrants. While Willie is away fighting, Nelly is left to run the saloon. Its customers are a mixture of Black and Irish people, reflecting the neighborhood as as a whole. Their nights at Paradise Square are a joyous outpouring of music and dance, combining Irish and African styles, in which all participate, for which Bill T. Jones has been nominated for the Best Choreography Tony.
As the story goes on, dark clouds begin to gather over this pleasant landscape. "Lucky" Mike Quinlan (Kevin Dennis) returns from the war missing his right arm, a fate for which he blames his adopted country. Then President Lincoln orders a draft of able bodied White men, non-citizen immigrants included, for which exclusion can be bought for $300, a very large sum at the time. This seems especially unfair to young Irish men, including Willie's newly arrived nephew Owen Duignan (A.J. Shively; nominated, along with Sidney DuPont -- see below -- for Best Performance by an Actor in a Featured Role in a Musical), who sings "Why must I die in springtime?" to save Blacks from slavery. This sets up a conflict involving his aunt, Willie's sister Annie Lewis (Chilina Kennedy), wife of Reverend Samuel Jacob Lewis (Nathaniel Stampley), a Black minister who serves as a stationmaster on the Underground Railroad. Reverend Lewis takes in Washington "Wash" Henry (Sidney DuPont; nominated, along with A.J. Shively, for Best Performance by an Actor in a Featured Role in a Musical) and his beloved Angelina Baker (Gabrielle McClinton), fugitive slaves who are doubly endangered because they are accused of the murder of their slave master in Tennessee. Both Owen and Wash are in desperate need of money; Owen to escape the draft and Wash to finance his and Angelina's escape to Canada and to establish a new life there.

The Draft Riots brought an end to Paradise Square and to the Five Points as it was, but Nelly retains her faith that the harmony that existed there can be restored. Her rendition of "Let it Burn" evoked a standing ovation. Here's an interview with Joaqina Kalukango in which she tells what she learned about history from preparing for her role in Paradise Square:
I was drawn to see Paradise Square because my old friend Larry Kirwan is credited with conceiving the story, and is nominated, along with Christina Anderson and Craig Lucas, for Best Book of a Musical. I got to know Larry in 1978 when he and Pierce Turner, as Turner and Kirwan of Wexford, were the house band at the Bells of Hell. I'll confess that the last time I saw him was in 2011 when, at his invitation, I attended a Bloomsday event and, sufficiently lubricated by Guinness, gave a reading that was videoed by his wife, who also was my daughter's dance teacher at P.S. 150.
Paradise Square is now scheduled to run at the Barrymore Theater through November 27. Update: unfortunately the show just closed. I'm surprised it didn't get better attendance, given at least Ms. Kalukango's best performance award.
Posted by Claude Scales at 11:56 PM No comments: