The Times' Clyde Haberman on chronicling the Lion's Head.

Clyde Haberman, who took a drink or two at 59 Christopher Street back in the day (I never had the pleasure of meeting him), had a piece in yesterday's New York Times about Dermot McEvoy's project to compile an "oral history" of the Head, and about the many Head regulars who have died in recent years. If you have a story or two, or more, to share, please send it to Dermot at dermotmcevoy@hotmail.com.

Update: It seems that Mr. Haberman's piece about the Lion's Head was one of the last of his NYC columns. On Thursday he issued his final column in the series. In it, he explained what he tried to do over the past sixteen years:

My goal was simply to make a desperate stab at explaining the maze called New York City. When I failed, people let me know. But the reward was the thousands of generous messages over the years from readers, many of whom accused me of having consistently made them laugh.

I was one of those, and I'll miss the column. He writes, "[t]here is time for a new adventure or two at this place." So, it seems, I'll be able to find his writing, and wit, elsewhere in the Times. But farewell to NYC, and thank you, Mr. Haberman, for years of stimulating reading, and for putting a link to my blog in the on-line version of your column about the Lion's Head.
Posted by Claude Scales at 1:32 PM No comments:


Hearing this lovely piece for four-handed piano on WQXR sent me searching for a video; the best I could find, and I think it's superb, is this performance by the then fifteen year old twin sisters Susan and Sarah Wang (they are now in their twenties; read more about them here).

The story behind this piece is that Fauré had an affair with the singer Emma Bardac, who was later to become Madame Debussy. Bardac had a young daughter, Hélène, who was called "Dolly." Fauré adored the little girl, and composed a six part suite for four-handed piano, which he named in her honor, one part being composed for each of her birthdays. This is the third part ("Dolly's Garden") of the suite (the others are Berceuse, Mi-a-ou, Kitty-valse, Tendresse, and Le pas espagnol). 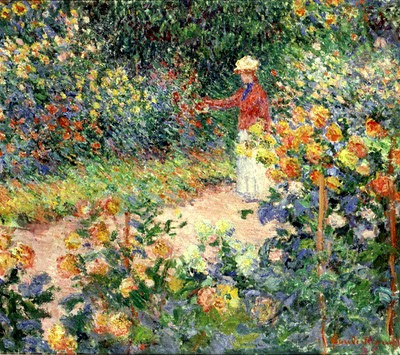 Le jardin de Dolly seems to me (perhaps not surprisingly, given my liking for seeing connections between music and visual arts) the epitome of impressionism in music; the aural equivalent of one of Monet's roughly contemporaneous Giverny paintings. For an example, consider Monet's Garden at Giverny (1895) above (E.G. Bührle Collection, Zurich; image from WebGallery of Impressionists).

Dolly later became Madame Gaston de Tinan; she died in 1985 at the age of 93. 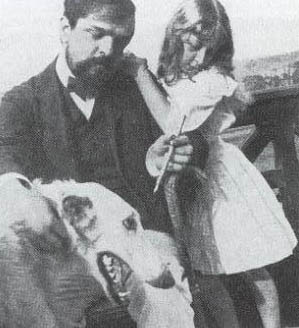 Addendum: I've gotten lots of hits on this post from web searches for "Madame Gaston de Tinan". I decided to do my own search and found, at this website, a photo of Dolly with her later to be stepfather Claude Debussy, along with a very impressive looking borzoi, taken in 1904, when Dolly would have been eleven or twelve years old. The linked post quotes from a lecture she gave in 1972, when she would have been about eighty, preserved by the British Institute of Recorded Sound (now the National Sound Archive), in which she said that Debussy's composition was influenced by visual arts, as well as by fiction and poetry:


He had a great partiality for the paintings of Turner and Whistler and the drawings of Arthur Rackham, one of which inspired the Prelude “Les fées sont d’exquises danseuses”. Neither must we forget other titles of British inspiration: Children’s Corner, Homage to Samuel Pickwick Esq, Puck’s Dance, and finally The Blessed Damozel of the pre-Raphaelite painter and poet, Dante Gabriel Rossetti.

Posted by Claude Scales at 10:01 AM No comments: