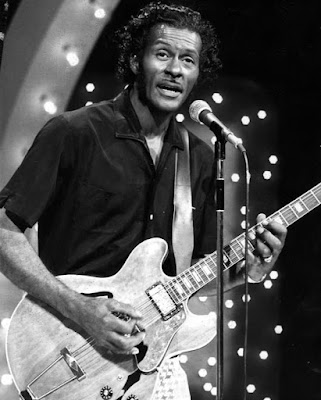 Chuck Berry, who, in my opinion. did as much or more than anyone to make rock 'n' roll what it is, and whose inspiration was essential to the Beach Boys and the Rolling Stones as well as important to the Beatles, died today at the age of ninety. He continued performing well into his eighties. I once posted a clip of him singing one of his early hits, "Sweet Little Sixteen," at the Newport Jazz Festival in 1958. The Jazz Festival crowd seemed to be much more receptive to Berry than was the Folk Festival crowd to Dylan a few years later.

So, what song to remember him by? My choice is the one that made Number Two on my all time rock and pop hits list, "The Promised Land." It's a driving rocker in the best Berry tradition, and also includes some subtle racial commentary, as did some other of Berry's songs. It didn't take much imagination in 1964 to know that "downtown Birmingham" was a bad place for a young Black man to be "stranded" because a bus broke down. Fortunately, he has enough saved up to get a train ticket out, fast. When he gets to New Orleans, though, he's out of money, but "somebody" helps him to get to Houston, where some "people who care a little 'bout me," evidently prosperous extended family, get him a suit, luggage, and airfare to Los Angeles. The overarching narrative is that of escaping the South (Tidewater Virginia) for the supposedly more welcoming West Coast.
Posted by Claude Scales at 12:03 AM No comments: