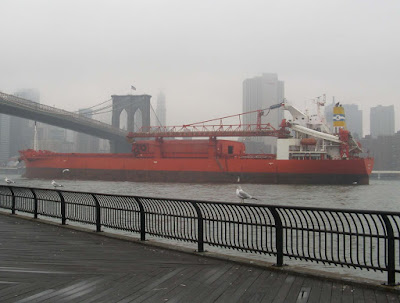 It was a gray, gloomy morning Thursday when I was on my run through the Empire - Fulton Ferry State Park in DUMBO and saw, with my peripheral vision, something big and reddish-orange overtaking me off to my right. It was Balder, a self-unloading bulk cargo ship (in that respect an oceangoing version of the Great Lakes ships like Calumet that were the subject of an earlier post) belonging to the Norwegian Torvald-Klaveness shipping group, named for the Norse God of "light, joy, purity, beauty, innocence, and reconciliation", but flying the flag of the Marshall Islands and, according to this article, trading mostly among the east coast of the U.S., Canada, the Caribbean and South America. Below is a closer view of Balder's stern, showing the elaborate conveyor equipment used to handle cargoes like gypsum, salt and sand. 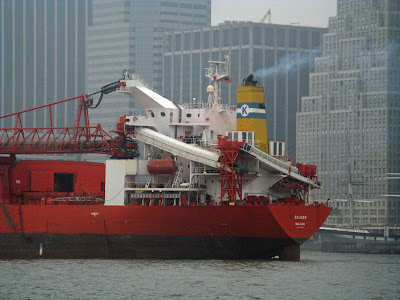 An old friend, a lapsed Roman Catholic, used to call Ash Wednesday "All Loons' Day". Today, as last year, I've chosen to bear the mark of the loon, though I'm still beset by the same doubts as when I posted a year ago. This year I approached the liturgy of the ashes with some urgency. Ash Wednesday (and, indeed, the whole succeeding forty day Lenten season) is for Christians what Yom Kippur is for Jews: a time for atonement, and atonement is what I felt I needed, in spades. (I won't burden you with why.)

As I've noted recently, I have great difficulty with the notion of "faith" as it is commonly understood in a Christian context; that is, as a willingness to suspend skepticism with regard to propositions that are not amenable to empirical testing. This may simply be a manifestation of a strong anti-authoritarian streak.

While riding the subway to my office, I remembered that T.S. Eliot had written a poem titled "Ash Wednesday". I found it through a web search, and realized that it expressed, as exemplified in the lines quoted above, one aspect of Christianity that I endorse without hesitation: its embrace of paradox. Why this appeals to me is something I'll have to save for a later post.
Posted by Claude Scales at 12:20 PM 2 comments: