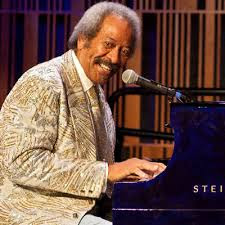 Allen Toussaint, who died this past Monday at 77, was a commanding, if nevertheless somewhat self-effacing, figure in New Orleans R&B from the 1960s until now. He was better known as a songwriter than as a performer, although he was a first rate musician who got his break into the business subbing for Huey "Piano" Smith at a gig in Alabama. Some of his earlier compositions, such as "Lipstick Traces" and "Fortune Teller", both recorded by Benny Spellman, were published pseudonymously under the name of his mother, Naomi Neville. "Fortune Teller" was later covered by the Rolling Stones.

A favorite of mine from his early works is Chris Kenner's 1961 hit "I Like It Like That". It has the springy rhythm and slightly understated quality of much of the best New Orleans R&B. I also like it for the line,"Let me show you where it's at", which brings to my mind the New Orleans greeting, "Where y'at?" That's the reason speakers of New Orleans dialect are called "Yats."

After Katrina did her worst to the Crescent City, Toussaint went to New York, and collaborated with Elvis Costello on a CD called "The River in Reverse". The clip above, "Who's Gonna Help Brother Get Further?", is from that album.
Posted by Claude Scales at 10:50 PM No comments:

This evening I attended a lecture by Stephen Petrus, curator of the "Folk City" exhibit at the Museum of the City of New York, and co-author, with Ronald D. Cohen, of Folk City: New York and the American Folk Music Revival, a copy of which I bought, and Stephen kindly signed for me, and which I will review here once I've read it. Based on what I heard earlier, it promises to be a very interesting read. The lecture was held at New York University's Tamiment Library and Robert F. Wagner Labor Archives. One of the topics that came up in the discussion following the lecture is how the real estate market in New York is making the city unaffordable for young, impecunious creative people like those who came here and fueled the folk music boom of the 1960s, memorialized in Bob Dylan's "Talkin' New York".

One of those present was a singer and songwriter I've admired since the 1960s, Eric Andersen, and whom I was able to meet and talk with after the lecture. During the part of his lecture covering folk music of the civil rights movement, Stephen mentioned Eric's song "Thirsty Boots":
Posted by Claude Scales at 11:00 PM No comments: