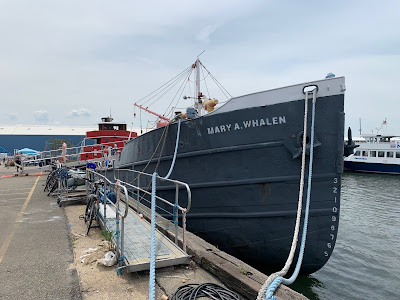 Yesterday was the 83rd birthday of the small coastal oil tanker Mary A. Whalen (photo above). She is owned by PortSide New York, a not for profit organization that has as its purpose to demonstrate "new ways to bring urban waterways to life." 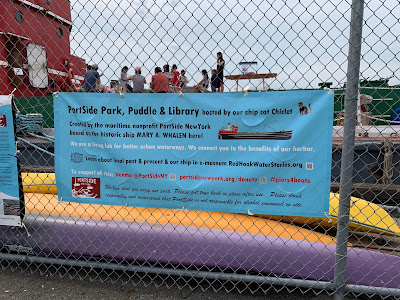 PortSide threw a birthday party for Mary, with educational events, art and activities for kids. 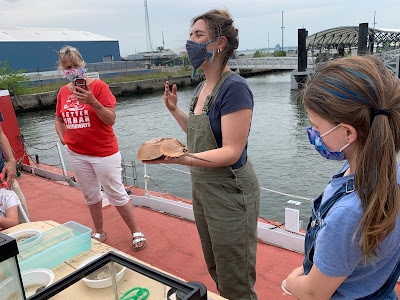 Emma Garrison (photo above, holding a horseshoe crab), a graduate student in the School of Environmental and Earth Sciences at Queens College of the City University of New York, gave a lecture on marine life in the estuary that includes Mary's dock. Standing to Ms. Garrison's right (left in the photo) in a red shirt is Carolina Salguera, PortSide's founder and executive director.
Before Ms. Garrison began her talk, a large container was lowered over the ship's side down to the water's bottom. It was hauled up after some time, covered in muck and strands of seaweed. Crew members sorted through the mess, and came up with some interesting creatures. 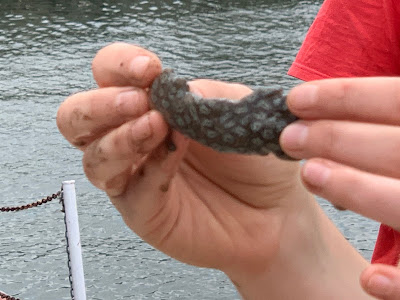 Among them were several tunicates (photo above), "colony animals" (each spot on the surface is a separate animal) that filter their food from the water. Also found were some other tunicates called sea squirts, which were shaped like little bottles with mouths and, when squeezed, would squirt water, to the delight of the children watching. 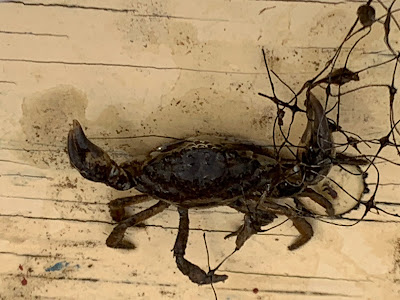 Another creature found was this little Asian shore crab. Ms. Garrison said these arrived here in the ballast water of ships that came from Asian ports. The haul also included some marine worms, mussels, and an oyster. 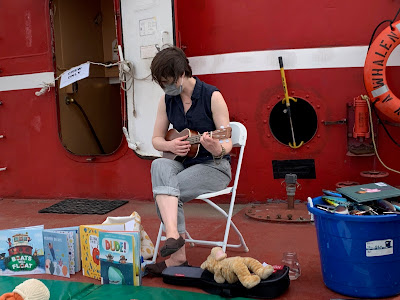 After Ms. Garrison's lecture and demonstration, a woman who introduced herself as Cat, a librarian, did some songs accompanying herself on ukulele, and getting the assembled kids to join in. She then read some children's books, again inviting audience participation. 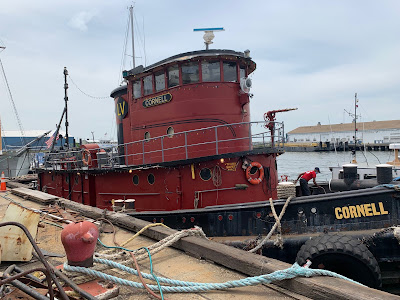 There were several other vessels docked ahead of Mary's berth. One of them was Cornell, a tug formerly owned by the Lehigh Valley Railroad and now preserved and used for excursions and training.
Your correspondent once took a ride on her and witnessed a rescue.
Although ship's cat Chiclet was named the official host of the party, she wisely remained in the cool of the warehouse adjoining the dock on a very warm afternoon.

Posted by Claude Scales at 4:17 PM No comments: