Remembrances and appreciations, 2018 and '19 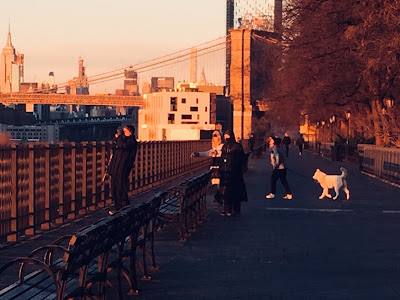 For some years I posted a remembrance of the past year, including a summary of the remembrances of those, either friends or those I admired, who have died, and an appreciation of those who have been helpful to my blogging. I last did these together in 2016. In 2017, the look back and the remembrances got separated. In 2018 I posted remembrances, promising "happier reminiscences soon," but never got around to that. Last year I began this post in February, and have left it in very incomplete draft form until now.

I posted individually during 2018 in memory of Aretha Franklin, Rusty Staub, Roger Bannister, and the congregants of the Tree of Life Synagogue murdered in the Pittsburgh massacre. These would have been included in my 2019 remembrances, had I gotten around to posting them. In 2019 I posted for Doris Day, Bill Buckner, Sandy Denny (although she had died 41 years before), John Phillips (not the one from the Mamas and the Papas), and Nick Tosches.

In recent years I've lamented the increasing number of people either that I had known in person or admired as artists, musicians, sports figures, or otherwise, who were dying. I put this down as a natural result of my growing old, and it mostly is. Of those who died last year and were noted on my blog, three - Bill Buckner, John Phillips, and Nick Tosches - were younger than me. I had known John for his entire life. Indeed, my first contact with him was when he was in utero. I was fourteen at the time, and his mother, Mary, during her eighth month of pregnancy, invited me to put a hand on her distended belly, where I could feel one of his feet moving.

The youngest of those I knew who died last year was Jack Hatton, 24. Jack was a year behind my daughter, Liz, in elementary school on September 11, 2001. Their school was close to the World Trade Center, and the principal decided to evacuate the students, either to a school farther north or, at parents' discretion, to home. Jack's mother, Marie Hatton, and I both decided to take our children home to Brooklyn Heights. Since transit wasn't working and the Brooklyn and Manhattan bridges were closed, Marie, Jack, Jack's brother Harrison Hatton, Liz, and I had to take a long, circuitous walk through the Lower East Side, where the Tenement Museum provided a respite, giving water and access to restrooms, then across the Williamsburg Bridge. On the Brooklyn side we were greeted by Hasidim offering us cups of water. Once off the bridge we found rest on the steps of the Peter Luger Steak House, where the staff gave the kids fries. I was able to reach Jack's father, Mark Hatton, by phone. He came and gave us all a ride back to Brooklyn Heights. Jack was the youngest in our group, but he never complained.

There are others whose passing I didn't note on the blog, not because I thought them less significant, but because their deaths came late in the year, when I was preoccupied with holiday preparations and events. Amy Talcott was a friend of many years, an administrator at Plymouth Church, a skilled seamstress who made dresses for several of our friends, and a loving wife to Ahsan Farooqi and mother to Amos Farooqi. Another loss was Elisabeth Brewer, mother of my friend Geoff Brewer and wife of my friend Wally Brewer. She was a stalwart of our own Grace Church and always a lively and engaging conversationalist. Annabella Gonzalez was a superb dancer and choreographer who led her own dance company. Her dances drew on various influences, including the traditions of her native Mexico as well as more contemporary themes. I got to know her many years ago when she married my previous colleague and long time friend Richard Grimm and later became the mother of Henry Grimm.

Other sad news came with the announcement that Congressman John Lewis had been diagnosed with cancer. I had a brief encounter with him in 1966, long before his election to Congress, when he was head of the Student Non-violent Coordinating Committee and we were both attending an Ecumenical Conference on Urbanization and Technology at Emory University in Atlanta. I don't recall the specifics of our short conversation, except that it stiffened my resolve to continue in the fight for racial equality and justice.

Another cancer diagnosis that hit me hard was that of Judy Dyble. I fell in love with her, or at least with her voice and artistry, in 1970 when I acquired the first Fairport Convention album (yes, the band still exists after more than forty years, with some personnel changes), and heard her cover of Joni Mitchell's "I Don't Know Where I Stand." In 2008, I posted an iPod Log that included a video clip of "Time Will Show the Wiser," a song from the first Fairport album, on which Judy sings harmony. This led to my getting in contact with Judy via email. Later that year I posted a video clip of Judy with some present Fairporters and others doing an obscure Bob Dylan song in French. This has, as they say, gone viral, though many of the hits have come from Russia and Ukraine. Is there something about Dylan in French that has peculiar appeal to the Slavic soul? More recently, Judy and I became friends on Facebook, which is how I learned of her diagnosis. She has begun a course of chemotherapy, keeps the proverbial English "stiff upper lip" about hair loss and such, and treats me with news of the British music scene and with photos of her rescued greyhound Jessie.

Despite all this sadness, there was much to celebrate in 2019. I've taken considerable inspiration from two courageous women. Jennifer Garam is the daughter of Peter Garam, with whom I shared an office when I first came to New York in 1970. I met Jennifer some years ago at a gathering of Brooklyn bloggers, and we became Facebook, as well as occasional encounters on the street, friends. Two years ago she was diagnosed with late stage ovarian cancer. She underwent surgery and chemotherapy, is now cancer free, and still writing compellingly.

The other is Lauren Jonik, whom I first got to know through her comments about my posts on the Brooklyn Heights Blog. I learned she was a skilled photographer, and met her face to face at an exhibition of her works. You can see her photos at Shoot Like a Girl Photography. She told me she had suffered a severe case of Lyme disease that struck her in her teens and kept her from completing her education on schedule. Nevertheless, she had since managed to study both photography and writing, and is now finishing her studies for a Masters in Media at The New School. She is the co-founder and editor of The Refresh, for which she wrote an essay about Mary Oliver, a poet whose works I love. Stephen Muncie, please take note.

It's de rigueur in pieces like this to express gratitude to one's immediate family, but it's not a sense of duty that makes me credit my wife, Martha Foley, and my daughter, Elizabeth Cordelia Scales. Yes, Martha has been patient about my hours of absorption with writing, but she and Liz have also been helpful as a critical audience for my ideas, often helping to sharpen my thinking.

There are many other friends, on Facebook and otherwise, who have been very helpful. They are too numerous to try to list. Among them are some with whom I disagree profoundly on some issues, but whose opinions I am always keen to understand. Please know you have my sincerest appreciation.
Posted by Claude Scales at 10:38 PM No comments: