Andy Irvine and Donal Lunny, "My Heart's Tonight in Ireland"

Posted by Claude Scales at 9:47 AM No comments:

Giving up church for Lent 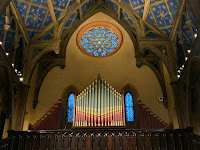 I don't usually "give up" anything for Lent. I've had some clerical support for this. Lent isn't about renunciation, I've heard in homilies, but about reflection. I try to do that. Four years ago I posted about my reflections looking back on Lent from Easter Sunday.

Still, as well as being a time of reflection, Lent should be a time of liturgical devotion; of faithful attendance at services, participating in communal worship and prayers, and taking of the Eucharist. That's why I was saddened, although I recognize its necessity, by the announcement that the Episcopal Diocese of Long Island is suspending, effective yesterday (Saturday, March 14) "all public worship" until Thursday, March 26, at which time it will be decided whether to continue the suspension. Any continuation would certainly extend through Holy Week; a sad prospect indeed. No Passion Narrative on Palm Sunday, in which, four years ago, I had the "honor" of reading the part of Pontius Pilate. No Stations of the Cross - a new, High Church addition to our liturgy this year. Worst of all, no Rev. Allen Robinson, our Rector, proclaiming on Easter Sunday, "Alleluia, Christ is risen!" and our responding, "He is risen indeed, Alleluia!"

So it was that I had a bit of a lie-in yesterday morning, knowing I was relieved of my duties of ushering and of being intercessor; that is. leading the Prayers of the People. But I missed the opportunity to join with my friends in worship, to greet our clergy - Allen, Erika, and Catherine - afterward, and to socialize at Coffee Hour (sometimes jokingly called the Eighth Sacrament of the Episcopal Church).  Update: Grace Church clergy are doing Morning Prayer services that are live-streamed on the church's website.

Another thing I'll miss is the weekly in-person meeting of the Education for Ministry class, in which I'm in my second year. This is a class given by extension from the University of the South at Sewanee, Tennessee, that is not for preparation to become clergy, but rather to educate lay Christians about scripture, church history and theology. Its intention is to prepare lay people for their ministry in daily life. We're looking for a way to continue meeting on line. Today I began reading one of our assigned texts: Life Together (1939) by Dietrich Bonhoeffer. For those unfamiliar with him, he was a Lutheran pastor and theologian, born in Breslau, Germany in 1906. His opposition to the Nazi regime led to his arrest in 1943 and execution by hanging in the Flossenburg concentration camp in April 1945, just two weeks before the camp was liberated by U.S. soldiers and a month before Germany's surrender. This gives a particular poignancy to the title of his best known work, The Cost of Discipleship (1937).

Life Together is a much shorter work than The Cost of Discipleship. Here is Bonhoeffer's preface:


The subject matter I am presenting here is such that any further development can only take place through a common effort. We are not dealing with a concern of some private circles but with a mission entrusted to the church. Because of this, we are not searching for more or less haphazard individual solutions to a problem. This is, rather, a responsibility to be undertaken by the church as a whole. There is a hesitation evident in the way this task has been handled. Only recently has it been understood at all. But this hesitation must give way to the willingness of the church to assist in the work. The variety of new ecclesial forms of community makes it necessary to enlist the vigilant cooperation of every responsible party. The following remarks are intended to provide only one individual contribution toward answering the extensive questions that have been raised thereby. As much as possible, may these comments help to clarify this experience and put it into practice.

Bonhoeffer's words convey a sense of urgency. They were written at the time when the Nazi regime was preparing Germany for war with its neighboring countries, and solidifying its racist doctrine that would lead to the Holocaust. He stressed the need for collective action.

The COVID-19 crisis may seem to be an impediment to our ability to act collectively, as it prevents us from physically gathering together. Technology that Bonhoeffer couldn't imagine lets us communicate in ways well beyond the printed word, radio, and telephone of his time. This technology has its well known downsides - it facilitates the propagation of falsehoods, enables on-line bullying, and lets us tune out all who disagree with us. Still, it does allow us to work together for the good, even if we must be physically separated. Let us do so, until this crisis has passed, as I fervently hope and pray it will soon.
Posted by Claude Scales at 1:05 AM 2 comments: