TBT: "Leader of the Laundromat" by the Detergents. 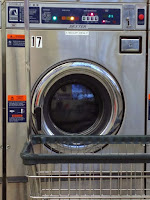 The news that coin operated laundromats are disappearing from New York, victims of ever-rising rents for commercial space and of services that will pick up, wash, and deliver your laundry, in the words of the linked Crain's story, "at the touch of an app," made me remember "Leader of the Laundromat" (1964), a spoof of the Shangri-Las' "Leader of the Pack", a number one hit that year.

The Detergents were Ron Dante, Danny Jordan, and Tommy Wynn, who were songwriters and session musicians for Aldon Music. The co-owner of Aldon, along with Al Nevins, was Don Kirshner, known for having launched the careers of Bobby Darin, Neil Diamond, and Kansas, among others, as well as having supplied songs for the Monkees.
Posted by Claude Scales at 10:42 PM No comments:

Thanks to John Lee, who was part of the superb technical crew that worked on the movie, I've learned that "Toxic Zombies," a.k.a. "Bloodeaters," a.k.a. "Forest of Fear," a.k.a. Il ritorno degli zombi, in which I play a small part, is one of 2,700 movies on VHS tape acquired by Yale's Sterling Memorial Library, according to this Yale Daily News story. The story mentions "Toxic Zombies" at the outset, evidently because of its gory title--also mentioned are "Silent Night, Deadly Night" and "Buried Alive"--but without mention (until my comment below the story) that its writer, producer, director, and star was a Yale Law School alumnus, my late friend (he was in his office on the 100th floor of One World Trade Center on the morning of September 11, 2001) Charlie McCrann. You can read more about the making of "Toxic Zombies," and find links to a trailer and some reviews, here.
Posted by Claude Scales at 11:25 PM No comments: