I take the Tim Sommer challenge: here's my top ten. 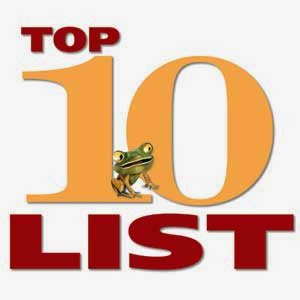 A few weeks ago Tim Sommer, whose Noise, the Column graces the Brooklyn Bugle, responded to his friend Tim Broun, publisher of the blog Stupefaction, by publishing a playlist of his top ten songs on the Bugle. He concluded the title of his post with, "Now It's Your Turn."

Here's mine. If Tim should read this, he will likely be disappointed by most of my choices being what he calls "'songs' that conform to the verse-chorus-verse-chorus-bridge-chorus virus." My descent into old fart-dom has long been underway, and ingrained habits die hard. Still, I'd like to think I'm not beyond having my notion of how music ought to sound stretched a bit. Thanks to Tim, I'll spend more time listening to the likes of Neu! and Liquid Liquid, though Scott Walker + Sunn O))) is, for me, a difficult stretch (I just listened to "Soused" a second time; it's starting to grow on me). I will even look back and reconsider Van Halen.

1. Neil Young and Crazy Horse, Like a Hurricane. If someone told me I had ten minutes to live, and could choose one piece of music to hear, I'd have a hard few seconds deciding between this and the first movement of Beethoven's "Archduke" Trio.

2. Chuck Berry, Promised Land. I never knew, until I just looked it up, that the tune is based on one of my favorite old-time country songs, Wabash Cannonball. Berry wrote the song in prison in the mid sixties, when L.A. was still the Promised Land. It was also a time when to be young, poor, black, and "stranded in downtown Birmingham" was a scary proposition, but Berry didn't need to dwell on that; he just got his protagonist outta there, pronto.

4. Mahavishnu Orchestra, Open Country Joy. John McLaughlin and company start softly, building into a lovely opening theme that ends abruptly, followed by a ten second silence, then by a frenetic, sometimes dissonant variation that finally resolves itself into a triumphant restatement of the opening theme.

5. The Ramones, Rockaway Beach. Someone once wrote that the Ramones were New York's answer to the Beach Boys. Was "Gabba gabba hey!" our "cowabunga"?

6. The Royal Teens, Believe Me. In 1959 I was thirteen and lovesick when I heard this song, announced as a "pick hit of the week" on WDAE in Tampa. I never heard it again on radio, nor did I find it on my occasional searches through bins of 45s in record stores, but every "ooh-wah-ooh," every tinkling piano note, was indelibly engraved in my memory. Cut to the cusp of the '70s-'80s. I'm in one of those West Village used vinyl emporia and come across a Royal Teens anthology LP. I bought it and dashed home to my then digs on East 11th to play the song I hadn't heard in twenty or so years. The tinkling piano is by Bob Gaudio, who later joined Frankie Valli and the other Jersey Boys in the Four Seasons, and wrote several of their hits. According to this excellent bio by Bruce Eder, Al Kooper played guitar with the group in '59, so may be on this cut.

7. Lou Reed, Coney Island Baby. From doo-wop to an homage to doo-wop. "The glory of love might see you through." Yeah.

8. Eartha Kitt, Uska Dara. One afternoon when I was seven, and my parents and I were living in half of a thatched roof cottage in rural Hertfordshire, my mom had the radio tuned to BBC and the announcer said, "Now, here's some Turkish music." What followed was so hooky that, like "Believe Me" six years later, it got burned onto my mental hard drive--well, not perfectly; the tune I remembered, but not the spoken bridge, nor the sung words, except for the end of the chorus, which sounded to me like "nebrezary on a shoe." Cut to the Bells of Hell, circa 1978. It's four on a Saturday or Sunday morning, the place is closing, and Mike McGovern--if you're a fan of Kinky Friedman's novels, that McGovern--invites the few serious drinkers left, myself included, to his place for a morning-cap. As we sipped Jameson Mike put on an Eartha Kitt LP and there it was, that song I hadn't heard since I was seven. I got my own copy soon after.

9. Southside Johnny and the Asbury Jukes, Take It Inside. The album Hearts of Stone is on my top ten rock albums list; it's the only one I've downloaded wholesale to my iPod. I chose this track for its showing of the group's versatility, from the Beatle-esque opening phrase, "Try to understand," leading into Johnny singing over a basic rock backing ensemble, then the entrance of the horns on the chorus. I also love it for its controlled but still white-hot passion.

So far, things were pretty easy. Tim suffered for his list; mine was a breeze. Then it got down to choosing that last number. I had two songs in mind. Both come from the British--one English, the other Scottish--folk-rock tradition. Well, I thought, it's possible to have a tie for ten. So, I've numbered the next two songs "10."

10. Mike Heron, Warm Heart Pastry.  Mike Heron was a founder of the Scottish acid-folk group Incredible String Band, which I saw in its death throes at the Bottom Line in the mid '70s, on a tour in which they had expanded to about twenty members, mostly by picking up musicians in every place they performed, including my native city. In 1971 Heron made a solo album, Smiling Men With Bad Reputations. "Warm Heart Pastry" is the one straight-ahead rocker on the album, with a hot backing band credited as "Tommy and the Bijoux." I later heard or read somewhere that they were The Who, playing under a pseudonym to avoid contractual problems. That proved to be partly true: they were The Who minus Roger Daltrey, but plus John Cale, who also appears on several other cuts on the album.

10. Richard and Linda Thompson, Wall of Death.  She was pregnant, and they were on the verge of marital breakup, when they recorded Shoot Out the Lights, one of the most emotionally harrowing rock albums ever. Richard was previously a guitarist and singer with Fairport Convention. The song has been described as "joyous," but the underlying tension seems obvious to me.