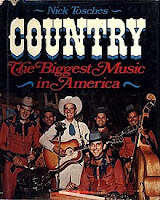 Nick Tosches died yesterday. I hadn't seen or been in communication with Nick for years, but there was a time, from the late 1970s to the early nineties, when I counted him as a close friend, and I believe he would have said the same of me. There was no rupture because of a disagreement. Marriage and fatherhood pulled me away - though not so quickly as my wife would have liked - from long hours in the Greenwich Village demimonde where Nick and I spent time together. Meanwhile, Nick was entering an especially prolific time in his writing career. Martha, my wife, says she still has somewhere a letter Nick wrote celebrating the birth of our daughter. As I recall, he wrote that it was an occasion "making November 4 a holiday."

Nick and I got to know each other at the Bells of Hell. What got our friendship going was a common love of country music. My fondness for it began in mid-childhood, when every summer my parents and I took a triangular trip from Florida to central Pennsylvania to visit my mother's relatives, then across Ohio to southern Indiana to see my father's family, then back to Florida. On these trips the car radio was always on, and in the territory we traversed country was the music you got. I came to associate it with these trips, which I enjoyed very much, partly for the visits with my grandparents, including a great grandmother who lived to be 103 and could remember the Civil War, but also because I loved seeing the country. My maternal grandmother lived near the then four track main line of the Pennsylvania Railroad, and I became a railfan early in life. In those pre-Interstate days of two lane blacktop, highways often paralleled railways, and I got to see trains on many different lines, including the sleek green, white, and gold diesels of the Southern, and the hulking steam articulated locos of the Norfolk & Western.

Nick's interest in country music stemmed from his love of rock and roll, a love I shared. Nick's first book, titled Country, was published shortly before I met him. Its original subtitle (see image of cover above) was The Biggest Music in America, but the third edition had a new one: The twisted roots of rock 'n' roll. Another thing we had in common was a love of history; I once loaned him my copy of William Appleman Williams's The Roots of the Modern American Empire, which I never got back. As a writer about rock, Nick became interested in its origins, which took him back to several sources. Three of these were in Black music: Delta blues, jump blues and rhythm and blues. Another was a style called "rockabilly," which took elements from the Black styles and combined them with the Appalachian ballad tradition.

One chapter of Country that I especially enjoyed was titled "Orpheus, Gypsies, and Redneck Rock 'n' Roll," in which Nick interviewed rockabilly artist Warren Smith, who years before had recorded a song called "Black Jack Davy."  Nick asked Smith where he got the song; Smith said, "I wrote it." Nick's next paragraph begins, "Cut to Athens, fourth century B.C." He then tells of the origin of the Orpheus legend, and over several pages gives a detailed history of its inclusion in Ovid's Metamorphoses, its retelling in Latin by Boethius, King Alfred's translation of Boethius into Old English, and the Orpheus legend's subsequent metastasization into English, Irish, and Scottish folklore. Here it became the story of a Gypsy, eventually known as Black Jack Davy, who steals a nobleman's wife. In later versions, she chooses to stay with the Gypsy.

Another short chapter, "The Girl Singer," that Nick later described, in the preface to the Da Capo edition of Country, as "truth masquerading as fiction masquerading as truth," tells of his apparent encounter with a transgender person.

Nick's second book was Hellfire: The Jerry Lee Lewis Story. The British newspaper The Guardian rated it first in its list of the fifty greatest music books ever. Nick told me that, when he was interviewing Jerry Lee. he asked about an incident in which Jerry Lee shot his bassist. This had been ruled an accident. Nick asked if it really was an accident. Jerry Lee said, "A sanctified preacher don't make no mistakes."

Nick had many more books, some but not all of which I've read. I gave a copy of Dino: Living High in the Dirty Business of Dreams, Nick's biography of Dean Martin, to my father, who liked it very much. It's referred to in Neil Genzlinger's NYT obituary, which is linked at the top of the post but linked here again for your convenience.

While I earlier wrote that there was no disagreement between Nick and me, I think that, on a fundamental level, one that nevertheless didn't affect our friendship, we were very different. The NYT obituary includes this observation, given in response to a Times interviewer in 1992 concerning the Dean Martin book: “Life is a racket,” he [Nick] added. “Writing is a racket. Sincerity is a racket. Everything’s a racket."

Nick's cynical view may reflect his background, growing up on the streets of Jersey City, while mine, which holds that things may improve despite human imperfectability, could reflect my having been the cosseted only son of parents of middle class means. This is a topic I mean to explore further in future posts.
Posted by Claude Scales at 12:44 AM 2 comments: