Who knew mortgage fraud could be sexy?
Posted by Claude Scales at 8:30 AM 1 comment:

Email ThisBlogThis!Share to TwitterShare to FacebookShare to Pinterest
Labels: Law

Pierre Bonnard, "Late Interiors", at the Metropolitan Museum of Art.

About a month ago I had an appointment on the Upper East Side; afterward, I had some spare time and decided to visit the Metropolitan Museum of Art. I first wandered through the Egyptian collections and the American Wing, then thought I would go to the other side of the building, to the modern collection, and, as I had my last time at the Met, sit on the bench facing Jackson Pollock's Autumn Rhythm (Number 30), and zone out for a while. On my way, though, I saw a sign pointing toward a special exhibit of works by Pierre Bonnard, The Late Interiors. Bonnard is an artist to whose works I've had limited exposure, and he was cited as an influence by Mark Crawford, so I decided to check it out. I was astounded. I didn't have as much time to enjoy it as I would have liked, so I went back several days ago for a more leisurely viewing. Below are images of some of the paintings that I found most interesting, taken from the Met's website, along with my comments. 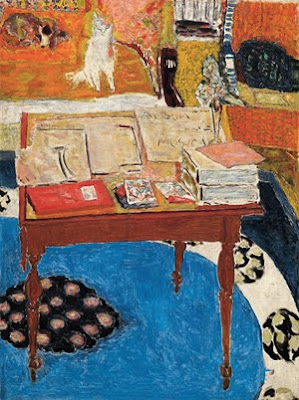 Work Table exemplifies several characteristics of Bonnard's art. The composition is elaborate: note the contrast between the rectangularity of the table and of the objects on it with the concentric circles of the carpet. There are ambiguities about scale and perspective: check the lengths of the table's legs, and how its surface appears to curve upward--or is the rear of the table, in fact, raised like an easel? Subjects that would likely command more attention in other paintings--in this instance, a dog, cat and kitten--are put near the margin. Although it can't be seen in this image, the artist's signature is at the upper left corner of a sketchbook on the table. 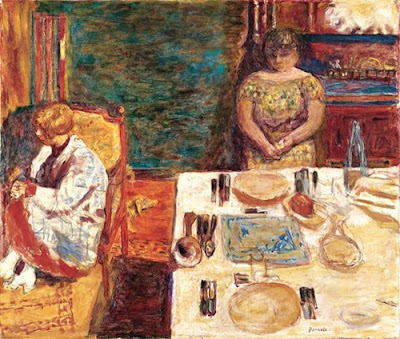 Before Dinner has a formal composition, with the carefully set table and the woman (the cook?) standing behind, hands clasped, facing forward; however, the formality is broken by the image of Bonnard's wife, Marthe, seated at the left, also with clasped hands, but turned away from the table and the other woman. Note the splash of white at the upper right (reflection off a silver platter?) and the white of Marthe's boots at the lower left. Revisiting a Bonnard painting often results in seeing previously unobserved details: during the time I spent looking at this painting in the gallery, I didn't notice the small dog emerging from behind Marthe's chair. 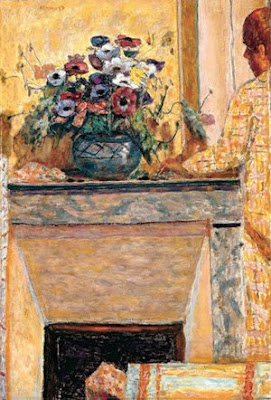 Bonnard takes a typical still life subject in Flowers on the Mantelpiece at Le Cannet and transcends it by placing Marthe, half-seen, at the right. The flowers have a wilder aspect than in most floral paintings: note how the stalks of some extend far from the bowl and central mass of blossoms, drooping and then curving upwards. 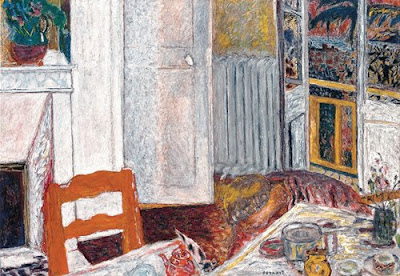 In The White Interior, Bonnard exhibits many variations on whiteness: the table, the wall, the door (bisected into two shades), and the radiator (which appeared less bluish in the gallery than in this image). All of this contrasts to the boldness of the bright, burnt sienna colored chair. This painting displays an extreme example of Bonnard's frequent marginalization of human and animal figures. Note the hunched figure of Marthe by the corner of the table, painted in muted tones, and the calico cat she is feeding, next to the red teapot near the center bottom of the canvas. 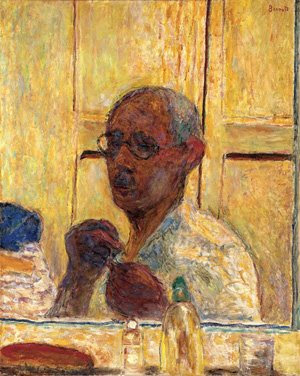 In this Self Portrait the artist is standing in front of a mirror above a shelf with toiletries. His skin appears quite dark (Riviera sun?) in contrast to the wall behind, which is awash in light. His expression bespeaks concentration: he appears to be using his right hand to unscrew a cap from something (bottle? toothpaste tube?) he's holding in his left. The features of the right hand are clearly delineated, while those of the left are indistinct (this is not so evident in the image above as in the gallery). This painting contrasts with another, "Portrait of the Artist in the Bathroom Mirror", that is also in this exhibit, and which was painted from the same point of view several years later. In the latter, he is without glasses, which emphasizes the deep blue of his eyes, and shirtless, showing a contrast between his tanned face and pale chest. His expression is melancholy. Perhaps something can be made of the superimposition of the artist's image, in both paintings, on a cruciform background. More likely, though, that's just the way it was. 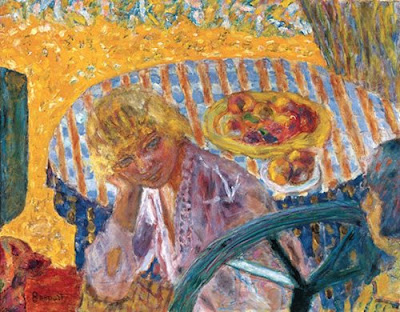 The dominant compositional theme in Young Women in the
Garden (Renée Monchaty and Marthe Bonnard) is of overlapping or superimposed circles or semicircles: Renée's blonde hair, the flower in her hair, the blue-green (it appeared much more green in the gallery) chair back, the table, with its blue and red striped cloth, and the platters on the table with round fruit on them. Note the bright yellow border around the table (dry grass? leaves?) that partially frames Renée. Again, Marthe is put in the margin, and rendered in muted tones.

There is a melodramatic story connected with this last painting. Renée was Bonnard's mistress for a time during the 1920s. After Marthe discovered the affair, Renée committed suicide. This painting was started in the '20s, but reworked and completed some twenty years later, after Marthe's death.

"Pierre Bonnard: Late Interiors" will remain at the Met through April 19.

Update: Another take on "Late Interiors", by Carol Gillott of Paris Breakfasts, is here. Her post includes an image of Bonnard engaged in his unusual painting technique, as well as of several of his sketches and sketchbooks that are displayed in the Met exhibit.
Posted by Claude Scales at 1:58 PM 4 comments:

Email ThisBlogThis!Share to TwitterShare to FacebookShare to Pinterest
Labels: Art

Das Rheingold (not the beer).


As I mentioned in my immediately previous post, yesterday my wife and I attended a panel discussion at the Metropolitan Opera on Wagner's Ring cycle. The panelists were: James Levine, the Met's Music Director; Otto Schenck, who is in charge of the Met's forthcoming production of Das Rheingold, the opening opera of the cycle, and two singers (whose names I failed to write and who are not on the abbreviated cast list on the Met's site) who play Rhine maidens. Levine and Schenck both stressed the importance of the maidens in setting the scene and motivating the action that gets the plot going.

The YouTube video above shows vignettes from the Royal Danish Opera's famous Ring, known as the "Copenhagen Ring", and begins with the Rhine maidens from Rheingold.

Update: Reader Martha (hmmm...who might that be?) comments that the Rhine maidens in the Copenhagen Ring are very different from those in the Met's production of Rheingold. I shall have to see.
Posted by Claude Scales at 11:05 AM 3 comments:

From The Met to The Met: a walk across Central Park to the West Side

This afternoon I went to the Metropolitan Museum of Art (a.k.a. "The Met"), located on the east side of Central Park in the lower 80s, to have a second view of Pierre Bonnard: The Late Interiors, on which I plan to do a post here soon. Afterward, I was to meet my wife at the Metropolitan Opera House (a.k.a. "The Met") for a panel discussion on Wagner's Ring cycle. Since I had enough time, and the weather was pleasant though nippy, I decided to walk from The Met to The Met, which involved a diagonal crossing of Central Park. 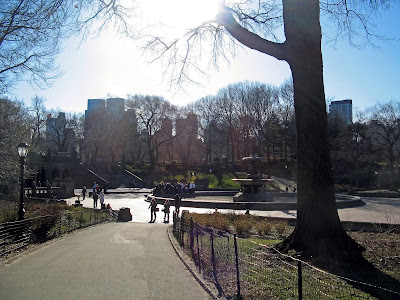 About halfway across the Park, I was approaching the Bethesda Fountain. The descending sun reflecting off a cloud mass made this an almost Turner-esque scene. 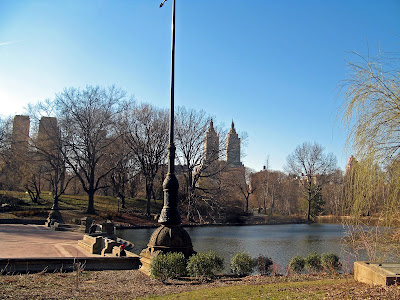 Closer to the Fountain, I could see the great old apartment buildings along Central Park West. The building with the twin Gothic spires is the Beresford; the one near the left edge of the photo with the two blocky art deco towers is the San Remo. 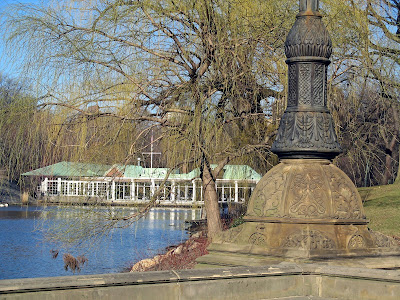 Looking back, I caught this view of the Boathouse. 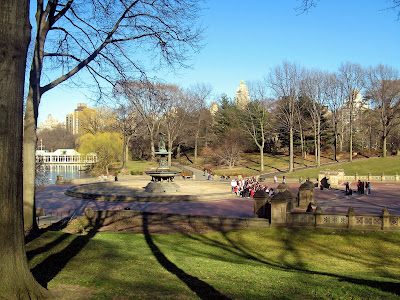 Having passed the Fountain, I looked back to capture this view. Note the elongated tree shadows, cast by the late afternoon sun, curving across the sloping lawn. 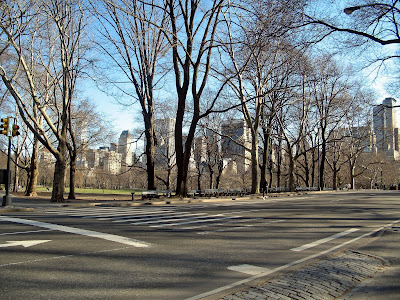 The still leafless trees afforded a clear view of the buildings on Central Park South. 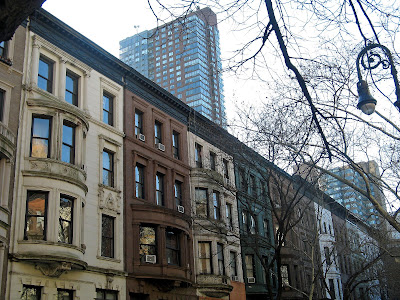 On the West Side, I was struck by this row of late nineteenth century brownstones on 69th Street, and their contrast with the high rise buildings beyond. Note also the "bishop's crook" streetlamp pole at the right of the photo. 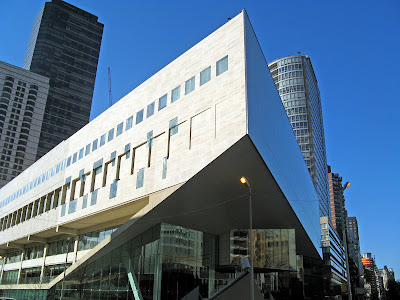 Here's the newly rebuilt Alice Tully Hall and Julliard classrooms, at the corner of 68th and Broadway. 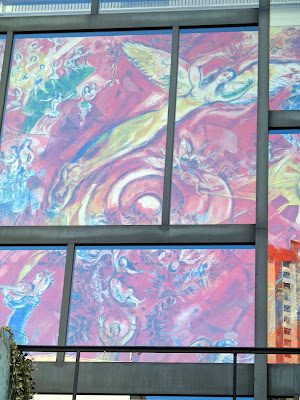 At last I reach The [other] Met, and am greeted by Marc Chagall's angel.
Posted by Claude Scales at 10:37 PM 2 comments: 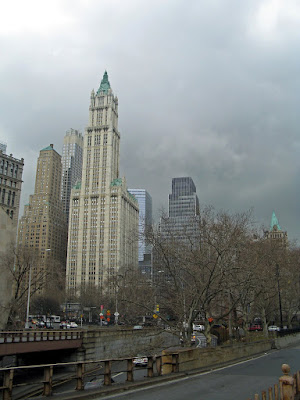 The Woolworth Building, Cass Gilbert's 1913 masterpiece, seen from the Manhattan ramp of the Brooklyn Bridge as storm clouds gather on the morning of March 20th.
Posted by Claude Scales at 3:59 PM 1 comment: