OK, I can do this "Throw Back Thursday" thing. I've never gotten my scanner to work, so I don't have lots of embarrassing old photos I can share, but I've decided that, every Thursday, Good Lord willin' and the cricks don't rise, I'll post one of my personal musical "golden oldies." I'm starting with this Bo Diddley inspired number that I first heard on WBCN, Boston's first album-oriented rock station, sometime (1967-70) when I was in law school, staying up late to do assigned reading. It's one of those songs that just stuck in my mind, despite never hearing it again until I did a web search yesterday. The clip above is of a live performance at Callahan's Music Hall, Auburn Hills, Michigan, in 2013.
Posted by Claude Scales at 12:14 AM No comments:

Don't let "loose" be your noose. Another usage scolding. 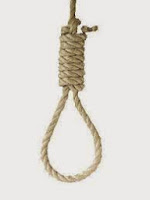 "These pants used to be loose, but now they're too tight. I need to lose some weight." In these two sentences, I've demonstrated correct uses of two similar words: "loose," an adjective meaning, in this instance, not tight fitting, but which has other meanings, such as approximate rather than exact; and "lose," a verb here meaning to shed, but which also may mean to fail to prevail in a contest.

Recently, I've been seeing a lot of misuse of "loose" where "lose" is appropriate, even in published articles such as Frank Sonder's (CEO and co-founder of foresee, GMBH) "The Future is Ours: Robots Take Over":


History shows that all industrial revolutions so far had positive effects, even with certain groups initially loosing their jobs to machines.

To be fair, this article (which I found on Linkedin Premium) was probably written in German, so the fault is likely that of the translator (Was a translation program used?) rather than Sonder's. Still, I've seen this error often enough in ordinary on-line discourse that it does seem to be a common one--and a sneaky one because spelling checker programs don't catch it.

I don't recall ever seeing the opposite error--using "lose" where "loose" is meant (e.g. "These pants are too lose"). Maybe the confusion comes from the fact that "loose" can be used as a verb ("I will loose my bulldog from his chain"), although this usage seems almost archaic, having been replaced in contemporary usage by "release."

Go back and read the first two sentences of this post. Got it? Go, and sin no more.
Posted by Claude Scales at 9:42 PM No comments: