This was a favorite of Nick Tosches. I remember his repeatedly, and unsuccessfully, cajoling Delbert McClinton to do it at the Lone Star Cafe. The sound and video quality on this vintage clip, courtesy of Glauco Malagoli, isn't the greatest, but Louis Prima's talent shines through. Keely Smith sings and acts wonderfully. Nick also gets a credit on the clip.
Posted by Claude Scales at 12:53 AM No comments:


In the continuing e-mail discussion of the history of the Lion's Head hosted by Dermot McEvoy, who is writing a book about it, Lucian K. Truscott IV made this observation:

I’ve been thinking about this, and I guess every generation goes through this same sort of geezer stage, when there are fewer and fewer people around who remember the good old…or bad old…days. It’s the natural order of things.

I remember one Saturday years and years ago, back in the late 80’s, after I had moved out of New York. I was back for a couple of days staying with a friend in the Village, and I was walking down Bedford Street, or one of those nice little streets over there west of 7th Avenue, and I saw this young woman walking down the street toward me. She was in her early 20’s, and dressed real cool, and she was gorgeous, and she was going somewhere important to do something important, almost bent forward with the energy of youth and Great Expectations. It came to me that she was exactly like the young women I lusted after when I was her age. We were all gorgeous and dressed real cool and headed someplace fast to see someone important or do something important, filled with Great Expectations that would come true, damn it, or we would die tryin’. All of a sudden I realized that we had been replaced. That the little studio apartments all around me were no longer filled with my friends and acquaintances, but hers. The street was hers now. The energy was hers. The important people she was going to see were her important people, not mine, and the important things she was going to do were different than our important things. The only things that remained pretty much the same were the street and her gorgeousness and Great Expectations.

Dermot replied that this made him think of the song "Dirty Old Town", as done by another, now deceased, Head regular, Liam Clancy, and gave a link to the YouTube clip above. This song was a favorite of another now departed Head stalwart, Dennis Duggan.

Dermot is quoted in this New York Observer article about the changes that have been wrought on Greenwich Village and New York City at large.
Posted by Claude Scales at 9:28 AM No comments:

From the "Letter from Birmingham Jail." 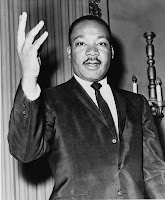 The Rev. John Patrick McGinty quoted portions of this paragraph of Dr. Martin Luther King, Jr.'s Letter in his homily this morning at Grace Church, Brooklyn:

We have waited for more than 340 years for our constitutional and God given rights. The nations of Asia and Africa are moving with jetlike speed toward gaining political independence, but we still creep at horse and buggy pace toward gaining a cup of coffee at a lunch counter. Perhaps it is easy for those who have never felt the stinging darts of segregation to say, "Wait." But when you have seen vicious mobs lynch your mothers and fathers at will and drown your sisters and brothers at whim; when you have seen hate filled policemen curse, kick and even kill your black brothers and sisters; when you see the vast majority of your twenty million Negro brothers smothering in an airtight cage of poverty in the midst of an affluent society; when you suddenly find your tongue twisted and your speech stammering as you seek to explain to your six year old daughter why she can't go to the public amusement park that has just been advertised on television, and see tears welling up in her eyes when she is told that Funtown is closed to colored children, and see ominous clouds of inferiority beginning to form in her little mental sky, and see her beginning to distort her personality by developing an unconscious bitterness toward white people; when you have to concoct an answer for a five year old son who is asking: "Daddy, why do white people treat colored people so mean?"; when you take a cross county drive and find it necessary to sleep night after night in the uncomfortable corners of your automobile because no motel will accept you; when you are humiliated day in and day out by nagging signs reading "white" and "colored"; when your first name becomes "nigger," your middle name becomes "boy" (however old you are) and your last name becomes "John," and your wife and mother are never given the respected title "Mrs."; when you are harried by day and haunted by night by the fact that you are a Negro, living constantly at tiptoe stance, never quite knowing what to expect next, and are plagued with inner fears and outer resentments; when you are forever fighting a degenerating sense of "nobodiness"--then you will understand why we find it difficult to wait. There comes a time when the cup of endurance runs over, and men are no longer willing to be plunged into the abyss of despair. I hope, sirs, you can understand our legitimate and unavoidable impatience. You express a great deal of anxiety over our willingness to break laws. This is certainly a legitimate concern. Since we so diligently urge people to obey the Supreme Court's decision of 1954 outlawing segregation in the public schools, at first glance it may seem rather paradoxical for us consciously to break laws. One may well ask: "How can you advocate breaking some laws and obeying others?" The answer lies in the fact that there are two types of laws: just and unjust. I would be the first to advocate obeying just laws. One has not only a legal but a moral responsibility to obey just laws. Conversely, one has a moral responsibility to disobey unjust laws. I would agree with St. Augustine that "an unjust law is no law at all."

You may reasonably ask, may everyone decide what laws are just and which unjust? Everyone will, but we can hope that, as was the case with those who opposed the Jim Crow laws, those whose decisions are right will in the end prevail.
Posted by Claude Scales at 11:54 PM No comments: