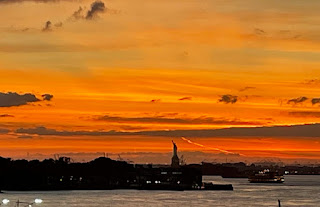 A year ago I did a separate post to show 2020 the door. I'm sure we can all agree that 2021 has, on balance, been less than delightful. There were many good things that happened, including in our neighborhood. Still, the emergence of Omicron, some severe weather disasters, and inflation driven by, in my view, a combination of manufacturers' misestimation of demand, supply chain problems largely caused by COVID, and concentration of economic power in some important industries, have made it a trying year indeed.
There are plenty of remembrances. Those most personal to me include Ron Jones, who was a valued mentor during my early years of law practice and a friend for years after; Wally Brewer, friend and fellow Grace Church parishioner; friend Leonard Ryan; and Martha's cousin and our friend Alice McFarlane.
2021 saw the passing of many people prominent in matters of government and statecraft; local, national and international. I remembered Colin Powell and Desmond Tutu on this blog. They were joined by F.W. de Klerk, Bob Dole, Frances "Sissy" Farenthold, Vernon Jordan, Walter Mondale, Harry Reid, George Shultz, and John Warner. Special mention goes to Sarah Weddington, the lawyer who, at the age of 26, successfully argued for appellant "Jane Roe" before the U.S. Supreme Court, and who went on to serve as a Texas legislator and, later, advisor to President Jimmy Carter, in which roles she continued to be an effective advocate for women's rights. There are others I've failed to mention, for which I trust you'll forgive me.
Music suffered many losses. Those most keenly felt by me are Don Everly, who joined younger brother Phil among the departed; Maestro James Levine; Mary Wilson of the Supremes; Nanci Griffith; Paddy Moloney of the Chieftains; Stones drummer Charlie Watts; Michael Nesmith, best known for having been one of the Monkees but who had a fruitful solo career as a singer and songwriter; and Chick Corea. One musician we lost whom I wish I had known better is the rapper DMX.
Straddling the worlds of music and the stage was the magnificent Stephen Sondheim. The worlds of stage and screen lost, among many, Ed Asner, Ned Beatty, Olympia Dukakis, Hal Holbrook, Cloris Leachman, Christopher Plummer, Cicely Tyson, Melvin Van Peebles, and Michael K. Williams. I wasn't a Betty White fan, not because I disliked her (who could?), but because I rarely watched the TV sitcoms and game shows on which she made many of her appearances. If anything, I associated her with commercials. I'm now delighted to learn that in 1954 she defied demands from Southern viewers that she remove Arthur Duncan, a Black dancer from her variety show.
The literary world had its share of losses. Those the impact of which I feel most are novelist, essayist, and social critic Joan Didion, poet Lawrence Ferlinghetti (whom I once saw, bent over his manual typewriter, during a visit to his City Lights bookstore in San Francisco), and Larry McMurtry, realistic chronicler of the old and contemporary West.
Space exploration lost Michael Collins. As pilot of the Apollo 11 command module, "Iron Mike" remained aboard while crew members Neil Armstrong and Buzz Aldrin took the Lunar Excursion Module to the moon's surface and back.
Among baseball's losses were Hank Aaron, who broke Babe Ruth's long standing career home run record in 1974 and held it for thirty years; Jim "Mudcat" Grant, the first Black twenty game winning pitcher who enjoyed a post-baseball career as an R&B singer; and Tommy Lasorda, who began as a pitcher for the Brooklyn Dodgers and went on to manage the L.A. Dodgers for twenty years, winning four league championships and two World Series.
True to form in recent years, the Mets started hot but soon cooled off, again largely thanks to their injury proneness.  Owner Steve Cohen, looking for a quick turnaround next season, said "Fie to you, luxury tax; I'll pay" and opened his wallet to acquire ace pitcher Max Scherzer. The Mets also have a new manager, veteran Buck Showalter, three time American League Manager of the Year: once with the Yankees (1994); once with the Rangers (2004), and once with the Orioles (2014). The best I can say now is, I'm cautiously optimistic.
As always, I must begin my list of appreciations with my wife, Martha Foley, now not just for her encouragement of and suggestions for my blogging, but also for her self sacrificing help as I recover, slowly but surely, from my ankle injury. I also thank our daughter, Liz, and her boyfriend, Drew Rodke, for summoning help to deal with my injury, caring for me for two days - including a sumptuous Thanksgiving dinner - and driving me home to Brooklyn. Thanks to the physicians and nurses at Riddle Hospital in Media, Pennsylvania for stabilizing my fractures, and to the physicians, nurses, and physical therapists at NYU Langone Orthopedic Hospital for surgery, post operative care, and therapy. Finally, thanks to all my friends, too numerous to mention individually, who have provided support and encouragement, either in person, on the phone, or in writing.
Posted by Claude Scales at 8:15 PM 5 comments: