My Brooklyn Heights Blog colleague made this video. He gave it the title "A Tale of Two Bridges" because it includes scenes of and on both the Brooklyn and Manhattan bridges, but it concentrates on the latter, lesser known span. Lesser known, that is, until recently, according to this New York Times article. The Times piece attributes its new found popularity on the fact that its Brooklyn anchorage is next to DUMBO ("Down Under the Manhattan Bridge Overpass"), a neighborhood that has undergone roughly the same evolution that SOHO in Manhattan did starting about two decades earlier: from decaying industrial area to place where artists could occupy cheap if not yet quite legal loft spaces to trendy Bohemian neighborhood to pricey place for the rich but hip, combined with office space for tech companies.

I have a particular affection for the Manhattan Bridge: it was my first crossing of any of the East River bridges. This happened in 1954, when I was eight years old.  My parents and I had just returned from England, where my dad, a U.S. Air Force officer, had been stationed for three years. We came by ship, and debarked at the Brooklyn Army Terminal. There we boarded a bus to Penn Station that took us by way of Flatbush Avenue (when we turned onto this broad thoroughfare my dad, an Indiana native who had spent some time in New York City early in World War Two, said "This is Flatbush": noticing some low-lying shrubbery in a planter box on the median, I thought I knew what he meant) to the Manhattan Bridge, where I was thrilled by the view of the Brooklyn Navy Yard and East River traffic.

The  Manhattan Bridge was the last of four East River bridges--the others, in order of completion, are the Brooklyn (1883), the Williamsburg (1903), the Queensboro (now officially the "Ed Koch Queensboro Bridge"; also known as the 59th Street Bridge and as such immortalized by Simon & Garfunkel; March, 1909)--to be completed. The Manhattan Bridge was partially opened late in 1909, but not fully opened until 1912. It was designed by Leon Moisseiff, who was also involved in the design of the Golden Gate Bridge and the Benjamin Franklin Bridge in Philadelphia, but whose reputation was blotted by his having been the principal designer of the Tacoma Narrows Bridge, a.k.a. "Galloping Gertie" (caution: if you're at all nervous about bridges the linked video may give you nightmares, though it may also warm the hearts of dog lovers).

Update: there was a wild party on the Manhattan Bridge walkway Friday night. Read about it here; videos too!
Posted by Claude Scales at 11:00 AM No comments:

No, you can't reach a crescendo. Or can you, if you're a famous writer? 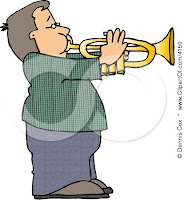 Miles Hoffman, a fine fellow I'm sure, takes umbrage with F. Scott Fitzgerald, the historian James M. McPherson, George F. Will, William Safire, and others, for using some variant of the phrase "reach a crescendo." This strummed a mystic chord of memory for me. Sometime in my tween years, I read a Walt Disney comic in which Donald Duck got into a noise war with a neighbor. Donald decided to finish it off by turning his record player to top volume and putting on "the fortissimo crescendo from Bombpopoff's 'Eruption of Vesuvius.'" I was pretty sure there wasn't a real composer named Bombpopoff, but I couldn't resist mentioning this to my music teacher. He laughed, and said there could be no such thing as a "fortissimo crescendo." "Fortissimo," he said, means "as loud as it can get." "Crescendo" means "getting louder." Nothing can be as loud as possible and getting louder at the same time.

This, essentially, is Hoffman's argument. To say or write, "The battle reached a crescendo," is nonsensical. a crescendo is a process, not a completion. It may end at fortissimo, or somewhere below that, but once it gets there, it's not a crescendo anymore. I could only agree.

But then I read a letter to the Times editor by Jamie Apgar, of Berkeley, California, in part as follows:


I am disappointed by Mr. Hoffman’s article. “To reach a crescendo” is an idiom. Idioms are suited for neither syntactical analysis nor literal interpretation. ...

More broadly, the point of language is to convey meaning. I doubt that any of the sentences by the famous authors that Mr. Hoffman mentions are rendered opaque by including the “crescendo” idiom. They may indeed be clearer or more powerful because of the metaphor. I think that I’ll stick with Fitzgerald.

Well, to say, "The battle reached a fortissimo," seems silly and confusing. One could instead say, "reached a climax," thereby substituting a sexual reference for a musical one. Or, there's "reached its acme," which might bring to mind Wile E. Coyote.

Jamie Bernstein, daughter of Leonard Bernstein, wrote to the editor that she was "gratified indeed" by Hoffman's piece for its "elucidation on the word 'crescendo.'" She went on to suggest "a reason for the pervasiveness of the misuse":


I’m certain that it’s because the sound of the word so felicitously evokes the crashing of cymbals: “the crash at the end-o.”

Be that as it may, I'm inclined to agree with Apgar: "reach[ed] a crescendo" is one of those usages that, through repetition, has come to mean something specific to most readers, although it may be at variance to what musicians and students of music understand "crescendo" to mean. I suspect John McWhorter would concur. (You can read the full texts of Ms. Apgar's and Ms. Bernstein's letters here.)

Perhaps the best known example of a crescendo, one that extends for the entire length of the composition, is Ravel's Bolero. Anyway, I couldn't resist the opportunity to send you to another of my posts.

Image:Best Clip Art Blog.
Posted by Claude Scales at 12:25 AM No comments: