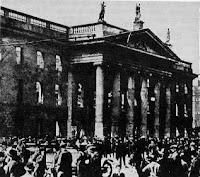 April 24, 1916 was Easter Monday that year. On that day members of the Irish Citizen Army, a volunteer force led by James Connolly and Patrick Pearse, took control of Dublin's General Post Office (photo) and other nearby buildings, and proclaimed a Provisional Government. British response was initially slow; Britain was embroiled in World War I, and only about 400 troops were garrisoned in or near Dublin. After reinforcements were brought in, the response was overwhelming. The GPO was recaptured, the leaders arrested, and sixteen of them were executed shortly after.

The Rising did not immediately stir the Irish people to resist British rule, which had been in place for many centuries. The executions, however, did have an effect. Michael Collins led a successful guerrilla campaign, which gained popular support, and which led to the treaty, negotiated by Collins with Winston Churchill, that led to the foundation of the Irish Republic. These events are well described in Dermot McEvoy's The 13th Apostle.

Perhaps the best known remembrance of the Easter Rising is William Butler Yeats' poem "Easter 1916", read in the video below by Tom O'Bedlam:

Posted by Claude Scales at 11:35 PM No comments: