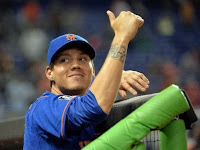 Of course, they're sharing this lofty position with the Nationals and the Phillies, who also won their season openers today. The Mets beat their erstwhile nemeses, the Braves, by 6-0. Despite giving up five hits, Syndergaard was dominant, striking out seven and pitching his way out of trouble until he was pulled after the sixth with a finger blister on his pitching hand. He got no support from the offense. The game was 0-0 at the end of the sixth, as the Braves' Julio Terehan was doing his usual flummoxing of Mets batters. But he was also taken out after the sixth. Mets reliever Robles kept Atlanta's bats silent through the top of the seventh, and in the bottom a succession of three Braves relievers allowed six New York runs to score, handing Robles the win. The first run in was Wilmer Flores (photo), who ran from second to home on a single to center and was initially called out by the home plate umpire. Mets manager Terry Collins challenged the call, and it was overturned on review,

There was no scoring in the eighth, and the Mets went to the top of the ninth appearing ready to cruise to an easy shutout. There was a bit of last minute drama. Gsellman, brought to the mound to close, allowed two hits, placing runners on second and third with no outs. I remembered a game back seventeen or so years ago when the Mets went into the ninth trailing Atlanta by seven runs, but jumped on the Braves' closer--I'm pretty sure it was the loathsome John Rocker, and several other arms brought in to try to stop the damage, to clinch an 8-7 victory. Could this be payback time? Then Gsellman struck out the next batter. The one after hit a little chopper that Gsellman fielded and threw to first for the out. Duda, at first, checked home, then noticed that the runner at second was way off base, and tossed for the pickoff. That ended the game.

Is there a dark lining to this silver cloud? Of course. These are the Mets, and there always must be injury problems, especially to pitchers. Syndergaard's blister isn't a serious matter, but in an abundance of caution Collins has moved his next start, against the Marlins, from Saturday to Sunday. The big worries are projected starters Lugo and Matz, who are sidelined indefinitely by elbow problems.
Posted by Claude Scales at 11:40 PM No comments: