Rick Danko, Vince Martin, Erik Darling, and Blondie Chaplin: how many names can I drop in one post?

I had the good fortune, during my evenings of hanging out at the Lion's Head in Greenwich Village during the 1980s, to get to know Rick Danko. He had been a member of the Hawks, a Canadian group that became the backup band for Bob Dylan, and later evolved into The Band. Rick died in 1999 at the age of 56.
Rick was unpretentious and welcoming. When I went to hear him and his post-Band group at the Lone Star Cafe, I was invited to join him and the other musicians upstairs during their break. Rather than breaking from singing, Rick picked up an acoustic guitar and sang "Cindy, Oh Cindy", a song that had been popular in 1956, when I was in fifth grade. When Rick finished, I said, "That's a great old Vince Martin song." Vince had done it with the Tarriers, a group that included Erik Darling, whom I had met at a party on the Upper West Side about ten years before, but that's another story. When I mentioned Vince's name, the man next to me turned and said, "Hello; I'm Vince Martin." I told him I loved Tear Down the Walls, a folk album he'd done with Fred Neil. Vince invited me to sing a song from the album with him. Rick handed Vince his guitar and we sang "Dade County Jail", me struggling to try to match Fred's rich baritone.
The clip above has Rick singing and playing bass on "Stage Fright", one of my favorite Band songs. Here he does it with another now deceased musician I admire greatly, but never met, Paul Butterfield. Paul was a veteran of the Chicago blues scene. On this clip he plays harmonica and sings harmony.
This clip features another of my Lion's Head companions, Blondie Chaplin, from the time when he and Rick were playing together, along with Paul Butterfield. On "Semolina" Blondie has the lead vocal and guitar, with Rick and Butter harmonizing and playing bass and harp, respectively. Blondie, a South African, became a member of the Beach Boys in 1972 after Al Jardine and Carl Wilson spotted him performing in London with his band, the Flames. After the time I knew him at the Head, he toured with the Rolling Stones for several years, and more recently has toured with Brian Wilson. He also has a solo album, recorded in 1997, that he plans to have released soon.
Posted by Claude Scales at 10:43 PM No comments: 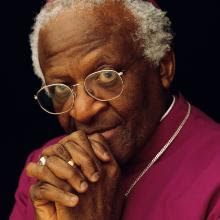 I've said before that the two people I am proudest to have met and with whom I've enjoyed short but inspiring conversation are the late Congressman John Lewis, whom I met at an ecumenical student conference in Atlanta in 1967 when he was head of the Student Non-Violent Coordinating Committee and the prospect of his ever serving in Congress seemed remote, and Archbishop Desmond Tutu, who died today in his beloved homeland, South Africa. I had the good fortune to hear Archbishop Tutu preach at St. James' Church during the early 1980s, and to meet and have conversation with him after the service. I regret that I don't have better recollection of the specifics of my conversations with these two most worthy men, but I know that I came away from them better for the experience.
Perhaps the defining characteristic of Archbishop Tutu was his generosity of spirit, which led him to seek healing and reconciliation following the end of the brutal apartheid regime which he had struggled to overcome. He also showed moral consistency in his opposition to corruption that undermined the government following the transition to full equality of citizenship for all South Africans. I chose the photo above, a profile photo from Prabook.com, because it reflects his intelligence but also hints at his playfulness and sense of humor.
Posted by Claude Scales at 11:02 AM No comments: