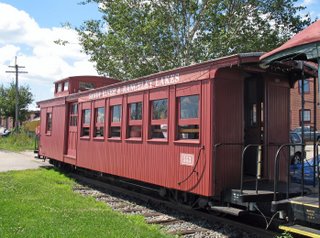 The State of Maine once had an extensive system of narrow gauge railroads; many of them, as in the Pacific Northwest, serving the logging industry. A small part of this system remains on the north side of Portland, preserved under the aegis of the Maine Narrow Gauge Railroad Co. and Museum. The MNGRR runs trains from just outside its museum and headquarters north along the Portland waterfront and back. When we arrived last weekend, a train loaded with tourists was about to leave. At the end was this handsome passenger car - caboose combination that formerly served in northern Maine on the Sandy River & Rangeley Lakes. 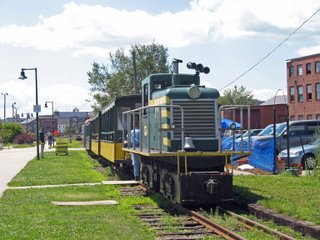 I walked to the front of the train, where I found this small steeple-cab diesel about to be coupled for departure. Note the formidable looking cluster of airhorns on this little engine. We then went into the museum, located in the red brick building in the background at the right. After we had looked at the many exhibits there, we came out to find that the train had departed. 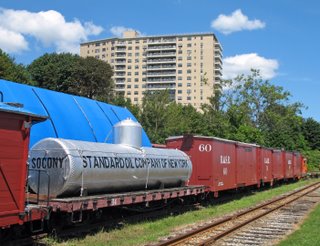 If you look at the empty track in the foreground, you can get a feel for how narrow it is: only two feet separate the rails.

Continued here.
Posted by Claude Scales at 9:14 PM No comments:

Postscript to "When good things ... "

The suggestion in Fred Kaplan's Slate article, to which I linked a couple of posts below, that the blanket refusal of the current administration to engage in discussions with the Syrians is dysfunctional, is echoed, and extended to the Iranians, by Richard Holbrooke in this Washington Post column.

Interestingly, Holbrooke's WaPo column was reprinted in the neocon organ, The New York Sun, which is where I first saw it. If Slate and the Sun can agree on something, well, ...
Posted by Claude Scales at 12:24 PM No comments: 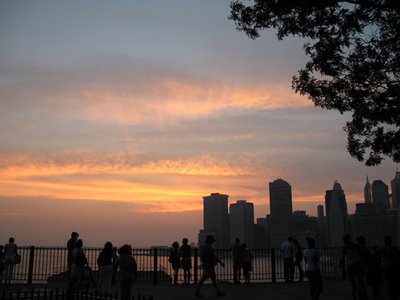 Top this, Key West.
Posted by Claude Scales at 10:58 PM No comments:

Back at the All-Star break, I bemoaned the appearance of five Mets on the cover of Sports Illustrated, predicting "dire consequences." My prediction has, so far, been off the mark, much to my delight. Now, with typical acuity, Tim Marchman explains the SI cover curse, in a way that makes me say "D'oh!"

This leads to another question: are the Mets, as the saying goes, the exception that proves the rule? I've never understood that one. How can an exception "prove" a rule?
Posted by Claude Scales at 8:53 AM No comments:

When good things happen because of bad people.

There's an interesting article by Fred Kaplan in yesterday's Slate that reveals the source of at least much of the information Britain's MI5 relied on to thwart the transatlantic airliner bombing plot as being the Pakistani military intelligence agency. Kaplan also refers to a New Yorker piece by Seymour Hersh, which I somehow missed, that described Syria as a valuable source of information about al-Qaeda in the period following the September 11 attacks. However, this helpful connection was cut after the invasion of Iraq, and a Syrian offer to rein in Hezbollah in return for continued exchanges of intelligence was allowed to expire.

Of course, the government of Bashar Assad wasn't being munificent out of sympathy with this country over the September 11 tragedy. The Baathists who rule Syria, as Kaplan explains, are no friends of al-Qaeda, which is allied with their principal internal opposition, the Muslim Brotherhood. It was simply a case of the enemy of my enemy being, perforce, if not my friend, at least someone with whom I'll cooperate. Similarly, Pervez Musharraf's military regime is, no doubt, less concerned about loss of innocent life than the consequences concerning substantial U.S. and British aid likely to ensue from massive loss of life caused by a plot hatched at least partially in Pakistan.

Kaplan's point is that an excessively Manichaean world view, which he ascribes to the Bush administration, can be unhelpful in coping with real world problems. This is something any fan of noir fiction can appreciate. To put it another way, the real lesson of Munich is not "Don't do deals with bad people", it's "Don't do bad deals with bad people."
Posted by Claude Scales at 7:02 PM No comments: