College football begins, and a belated farewell to Vic Ziegel.


The Harvard Crimson are the consensus favorites to win the Ivy crown this year, though the New York Times' Thomas Kaplan likes Penn's prospects. Do I care? Last year I mused about the fine points of Ivy football, as opposed to we-need-new-machines-for-the-training-room-so-let's-fire-the-philosophy-department football. But for which Ivy team would I root? For the reason given in the post to which I linked above, Harvard is out of the question. Penn is a possibility; after all, I'm a Keystone State native. If I chose based on my present location, it would be Columbia. I believe the Lions actually had a winning season five or six years ago. Backing them would be in character with my sports masochism: see under Mets, New York.

Anyway, I have my undergraduate alma mater, South Florida, to root for now. When I was a student (1964-67), President John Allen's policy was to allow only "participant-oriented athletics", which, I suppose, meant anything not likely to draw a crowd. It was huge when, in 1971 (after Allen's retirement), they got into basketball. Football didn't happen until 1997, initially as an independent in what was then called the NCAA's Division 1AA. The Bulls are now a BCS team, playing in the Big East Conference. They have a fairly impressive record, with only two losing seasons (1997 and 2004) and one break-even (2005), and bowl appearances every year since joining the Big East (their bowl record is 3-2; last year, they beat Northern Illinois 27-3 at the International Bowl, in Toronto). This year, they have a new coach, Skip Holz, who had a creditable record at East Carolina, and has impeccable coaching DNA. For the first time in several years, the Bulls didn't figure in the pre-season rankings (though they were among the "others receiving votes" in the USA Today coaches' poll, no doubt reflecting admiration for the Holz brand). They opened with a 59-14 trouncing of the Stony Brook Seawolves. It was news to me that Stony Brook, a unit of the State University of New York system located about forty miles from my home, has a football team. I was doubly surprised to learn that they play in the Big South Conference, along with teams like Charleston Southern, Coastal Carolina, and VMI. (Then, again, the University of Richmond used to be part of something called the Yankee Conference, which must have had Robert E. Lee spinning in his grave.)

This coming Saturday, South Florida has its first ever game against the Florida Gators, currently ranked fourth in the AP and third in the USA Today poll. The Bulls have a history of pulling off big upsets: in 2007, they beat Auburn and West Virginia when both were ranked in the AP top 25, and last year they unhorsed the Florida State Seminoles. Florida's season got off to a slow start Saturday as they defeated Miami University of Ohio by the closer than expected score of 34-12, in a game characterized by sloppy offensive play. I see this as bad news for the Bulls, as Gator coach Urban Meyer will crack the whip and the players will be motivated to make up for a poor showing in their opener. I used to be good at predicting the Gators' fortunes from game to game, but lately I've lost my touch. Last year, I thought they would lose to arch-rival Georgia, and was happy to see that prediction come a cropper. Nevertheless, I'll go out on the limb again and predict Florida 45, South Florida 17. 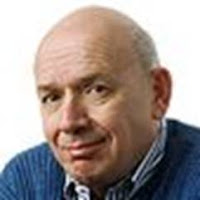 I'll end this piece on a sad note, with a farewell to yet another of my Lion's Head companions of yore, the sportswriter Vic Ziegel. I enjoyed many a chat with Vic at the Head's bar, mostly about baseball back in the days when the Dodgers were still in Brooklyn and the Giants inhabited Coogan's Bluff. College football wasn't Vic's game. When I mentioned it to him once, he shrugged and said, "Well, you've got Notre Dame, Michigan, Southern Cal...what else?" Another time, I remarked on the fact that every profile of a quarterback I had read in recent memory somewhere included the words, "his profound Christian faith". This led me to ask Vic if the great Chicago Bears quarterback of the 1940s, Sid Luckman, was Jewish. "Yes, he is" Vic answered, "I just saw him last week. Looks great." He also told me that Luckman was a Brooklyn native and played college ball at Columbia.

Update: Unfortunately, my prognostication for Florida/USF was pretty accurate.
Posted by Claude Scales at 12:24 PM 1 comment: