The Bells of Hell 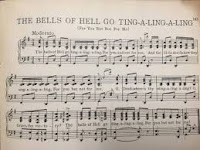 This is a slightly abridged and edited version of a piece I posted on the Fray three years ago as a comment on an article in Slate about "Bohemian New York", by Inigo Thomas, in which he mentioned Café Loup, which now occupies the space formerly taken by a great bar called The Bells of Hell.

I discovered the Bells in the summer of 1976, following the breakup of my brief first marriage, when I was moving from Bank Street off Abingdon Square to smaller digs in what had been the notorious Van Rensselaer Hotel, newly rehabbed as a yuppie warren, on 11th Street just east of Fifth Avenue. Although I had lived in the Village for three years, I'd never had occasion before to walk the block of 13th between Sixth and Seventh Avenues. When I saw the awning with "The Bells of Hell" on it, my first thought was that this was a bit far north and east for a gay leather bar. On the way back, I looked in the window and saw a sign that said, "Traditional English, Irish and Scottish Music." Being a big fan of Fairport Convention, Steeleye Span and their ilk, I resolved to check the place out sometime.

My first visit to the Bells was on a weeknight, when there was no live music. I found a vacant barstool near the door. To my left was a burly man with dark hair, and beyond him a brown-haired woman with glasses and a Scottish accent. The man introduced himself as Gary and his friend as Barbara. We chatted pleasantly while the jukebox cycled through "Dancing Queen" by Abba, Billy Connolly's spoof on Tammy Wynette's "D-I-V-O-R-C-E", Mna Na h'Eireann by the Chieftains, "Rivers of Babylon" by Boney M, "Hot Stuff" by the Rolling Stones, "I Can't Get Started" by Bunny Berigan, and "Highland Paddy" by the WolfeTones. Gary and Barbara filled me in on the history of the place. It had been started a couple of years before by the actor Malachy McCourt (now, along with his brother Frank McCourt, famous as a writer), who had been somewhat cavalier in the matter of paying Con Ed (the local electric company) and, as a consequence, had for a time done business by candlelight and with an ancient mechanical cash register. Malachy later sold the place to two Englishmen, Tony Heyes and Peter Myers. Tony is a Liverpudlian dockworker's son who had gone to Oxford on scholarship, gotten a Ph.D. from Michigan, ran the McGovern presidential campaign in Kentucky and Tennessee, and, during his tenure as a Bells owner, had a day job as an academic dean at the College of New Rochelle. (He later gave up academe and wrote a newspaper column on horse racing; the last I heard, he was doing some sort of business in Latvia.) Peter is a mountaineer and member of the Keswick Mountain Rescue Team. (He is now the proprietor of Myers of Keswick.) He is also a friend of Mick Jagger, who would visit the Bells now and then. (Many times I walked in and was told, "Oh, Mick just left" or "Right after you left last night, Mick came in." What I might have said if I actually encountered Mick is beyond my comprehension.)

The following Friday, I went again, and caught a show in the back room by two singers named Chris King and Mike O'Brien. As they were singing about "Men who strived, and men who died/ To tear the red rag down", I looked behind me and saw the two Brit owners grinning, no doubt thinking about the money they were making off this "Paddy music," as Gary had told me they called it. I decided it was definitely my kind of place.

During my time at the Bells I had lots of long, alcohol-fueled conversations with the likes of Nick Tosches and the late Lester Bangs. One night I was moved to make my confession of musical sin to Lester. I told him about several what I was sure he would consider lapses of taste, including liking Gordon Lightfoot. "Hmph," Lester said, "I know Gord. Do you know what he does when he needs inspiration to write a song? He goes to the hardware store and stares at the labels on cans of paint."

One of the Bells' regulars was an elderly Black man named Al Fields. Al had a private drink he called "kerosene" that included two or three kinds of clear liquor as well as (I think) Ouzo, served over ice in a beer mug. After a couple of these, he would often go to the back room and play the old upright piano that stood on the stage. One night, the members of The Clash were at the bar (I was elsewhere that night, natch) and were so impressed by Al's performance that they had him back them up on "Julie's Been Working for the Drug Squad" for their album Give 'em Enough Rope; however, Al's contribution was not included in the album's final cut.
I introduced my friend and law firm colleague Charlie McCrann to the Bells, and he also became a regular. He recruited several members of the cast of Toxic Zombies there. To my everlasting regret, Charlie was in his office on the 100th floor of One World Trade Center on the morning of September 11, 2001.

For much of 1978 and '79, the Bells' house band was Turner and Kirwan of Wexford, consisting of Pierce Turner, who is now a successful solo artist, and Larry Kirwan, who now fronts Black 47. I have a CD made from a tape of Pierce and Larry's last performance at the Bells, climaxing with their cataclysmic 22 minute version of "The Foggy Dew," at the end of which you can hear me whooping ecstatically.

The Bells died in August of 1979. Its nemesis, I understand, was (fittingly) an enormous arrearage due to Con Ed. Afterwards, most of the Bells crowd, including me, migrated to the Lion's Head, a somewhat more staid venue frequented by, as Ace Gillen, one of its regulars put it, "drinkers with writing problems." The Head lasted until the mid 1990's, and its demise marked, for me at least, the end of any semblance of Bohemia in Greenwich Village.
Posted by Claude Scales at 7:19 PM