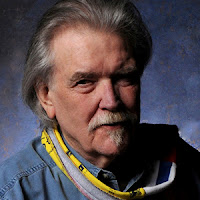 Guy Clark (1941-2016), who died on May 17, was a songwriter and singer from Texas. Although he was a very good singer, he's better remembered as a songwriter, because only one of his recordings of his songs charted--"Homegrown Tomatoes" in 1983--but a number of covers did. Among these were "L.A. Freeway" and "Desperados Waiting for a Train" by Jerry Jeff Walker (my favorite cover of "Desperados" is by Tom Rush, about whom I wrote here), and "Heartbroke" by Ricky Skaggs. Clark served as a mentor to many younger members of the country music scene, among them Rodney Crowell and Steve Earle. He also became a master luthier; a builder of guitars.


My favorite Guy Clark song, given that I'm a train buff, is "Texas 1947", which you can hear in the clip above, along with "Let Him Roll", also from his first album, Old No. 1. "Texas 1947" is autobiographical, telling of his going at the age of six to "the depot" in his hometown, Monahans, Texas, to see something new. 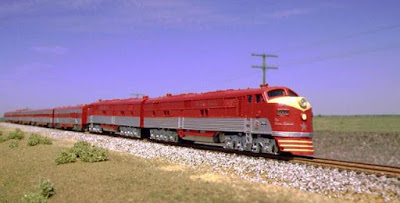 That "something" proved to be a streamlined passenger train, no doubt the Texas Special of the Texas & Pacific Railroad (photo above), pulled by a then novel diesel locomotive ("Big and red and silver, she don't make no smoke"). Although he was five years my senior, Clark and I shared seeing what railfans call the "transition years", when steam gave way to diesel.

The clip above shows Clark in a 2011 live performance of "My Favorite Picture of You", a song about his wife, the singer, songwriter, and painter Susanna Clark, who died in 2012. This became the title song of Guy Clark's last album, and the only one to win a Grammy.
Posted by Claude Scales at 11:57 PM