The Cosmic American Music Festival at the Derry Down. 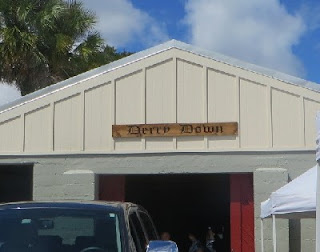 I first heard of the Derry Down in 1966, when I was friends with some fellow University of South Florida students who were from Winter Haven. It was a nightclub for teens, serving non-alcoholic Daiquiris and the like, and presenting local bands. Early on, this prominently included Gram Parsons' folk group, the Shilohs. After all, Gram's stepfather owned the place.

Although the Derry Down closed many years ago, somehow the rather unprepossessing building survived. It was recently donated by the real estate company that owned it, 6/10 Corp., to the civic group Main Street Winter Haven, which began the Derry Down Project to restore it as a venue for music. To raise funds for the project, Main Street promoted a Cosmic American Music Festival, which I attended. "Cosmic American" was the term Gram used for his music, a syncretic style that melded influences from country, rock, folk, and blues. Today it's called "Americana" or "roots" or "alt/country." 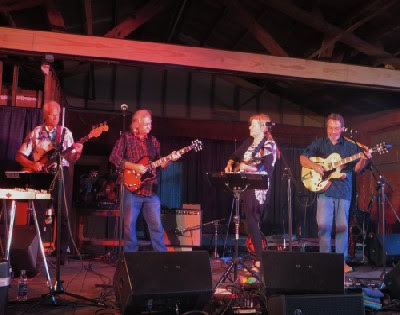 The festival opened the evening of Friday, September 18 with a concert in the Derry Down. The opening act was the Toni Brown Band (photo above). Ms. Brown has a musical history that includes performances with a "Who's Who" of rock and country acts. She is also a former editor and publisher of Relix magazine.


One of the songs she and her band did that evening was "Rabbit Hole Soul" (clip above). Others included the Grateful Dead's "Friend of the Devil" and Gram's "Sin City," which first was released on the Flying Burrito Brothers' premiere album, The Gilded Palace of Sin 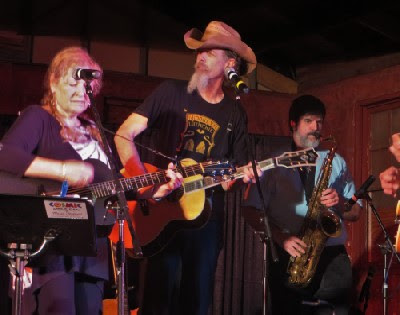 One of several musicians who joined Toni and her band on stage that night was Walter Parks. I noticed he was wearing a Brooklyn Lutherie t-shirt. Later, when I met him and commented about it, he showed me a guitar that had belonged to Richie Havens, for whom Parks had been lead guitarist. It had an abraded surface and other signs of wear, and he said he'd be taking it to Brooklyn Lutherie for repair soon. Also in the photo is sax wizard David Prince. 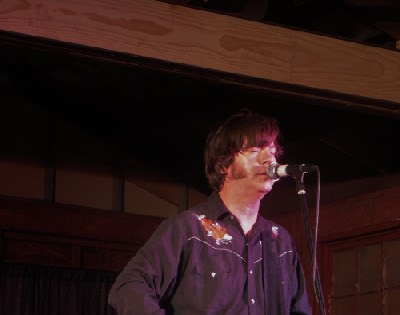 The night's headliner was Jay Farrar, formerly of Uncle Tupelo, a band that drew on many influences, from punk to Woody Guthrie, Lead Belly, and, yes, Gram Parsons. After the band broke up because of tensions between Farrar and Jeff Tweedy, who went on to found Wilco, Farrar put together Son Volt, which continued in a style similar to that of Uncle Tupelo. Recently, he's been touring accompanied by another Son Volt member, Gary Hunt, whom Farrar described as "a talented multi-instrumentalist." 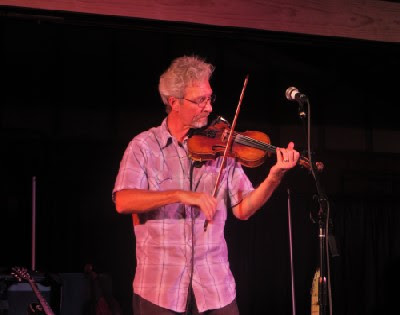 Was he ever. Here he is playing fiddle, 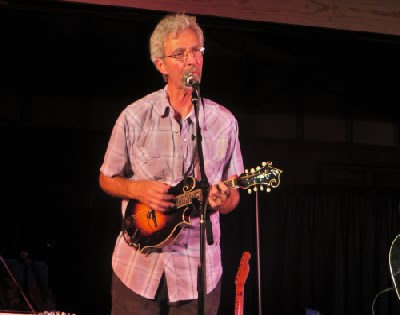 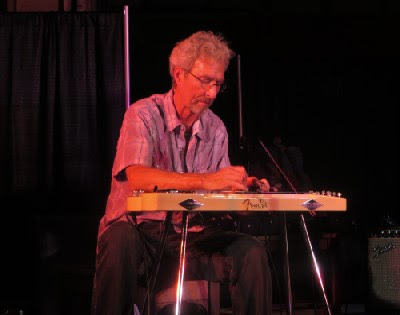 One of the songs Jay and Gary performed was a favorite of mine from Son Volt's album Wide Swing Tremolo, "Driving the View." The clip above is of their performance at STHLM Americana in 2019 (I've added it in 2022 to replace an earlier clip that disappeared from YouTube). Other songs they did included Farrar's "May the Wind Take Your Troubles Away" and a song about Highway 61 that wasn't Dylan's "Highway 61 Revisited." Called back for an encore, they did Dylan's "Rainy Day Women #12 & 35."


The following day, Saturday, September 19, the show moved outdoors during the afternoon. 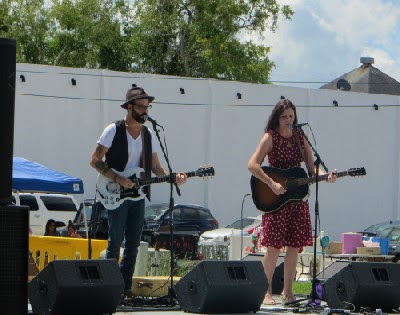 One of the acts to take the stage that afternoon was The Hummingbirds, a power roots duo consisting of husband and wife S.G. and Rachel Wood, Detroit natives who now live in my old home city, Tampa. (Detroit and Tampa are umbilically connected by Interstate 75.)

The Hummingbirds - 13 Days from Pilot Moon Films on Vimeo.

They did a splendid set that included the title track from their album 13 Days. Other songs they sang included "Leave This Town" and "Horses and Rattlesnakes". 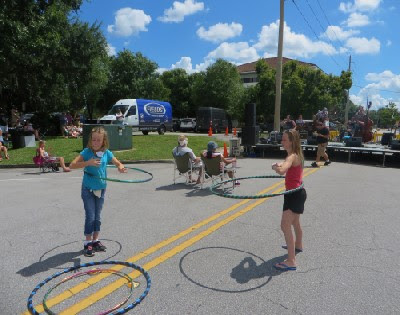 It was hot and humid, but that didn't dissuade these young fans from reviving a late 1950s fad.

Walter Parks (more of him later) did a solo set that afternoon, during which he charmed a toddler fan by coming down from the stage with his guitar. Other groups that appeared were: Have Gun Will Travel" from Bradenton, Florida (check out their "Dream No More"); I Want Whisky from Atlanta (listen to "Poor Man's Dollar"); and the Adam Hood Band (spend some time on "Grandpa's Farm").

Later we went to The Fire Restaurant, where I'd had dinner (oysters and sirloin, both excellent, and at a price that, as a New Yorker, very pleasantly surprised me) the evening before. This time, having had a hefty grouper sandwich from one of the food trucks serving the afternoon outdoor concert, I chose lighter fare: their "Old Skool" burger, It was very good, too.


Finishing my burger, I went to the patio in back where Walter Parks and his band, Walter Parks's Swamp Cabbage, were setting up. 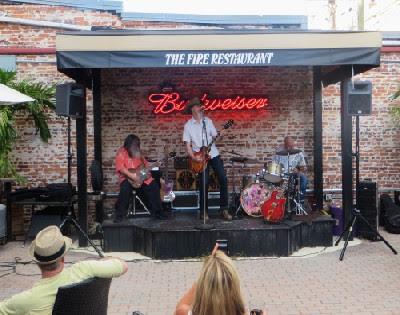 
Catch them live in the clip above, doing the Tallahassee Theme to "American Guns." Despite his Southern roots, Walter and the band are based in the New York City area, and gig at local venues. I'll keep my eye out for them.

Returning to the Derry Down Saturday evening for the Festival's final event (well, not quite final; I had an early afternoon flight on Sunday and couldn't make the farewell brunch at Tanner's Lakeside, again featuring I Want Whisky) I was treated to a second performance by The Hummingbirds, this time accompanied by a bass and drums. 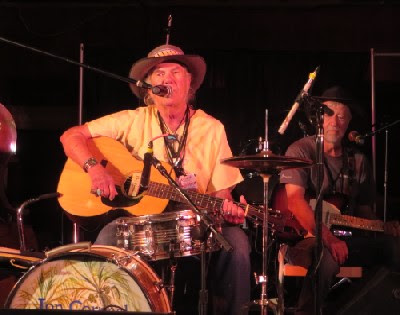 Also on the bill that night was a musician who had a closer connection to Gram Parsons than any other in the Festival's line-up: Jon Corneal (photo above; Jon played both guitar and drums during his set). Jon played drums and sang in the International Submarine Band, Gram's first country rock group. He also later played drums with the Flying Burrito Brothers.

Jon gets name-checked by Gram as the singer on their version of "Do You Know How it Feels to be Lonesome" on the ISB's only (but superb) album, Safe at Home.

The last group on the bill was the Hickory Wind Band, sometimes called the Hickory Wind Bluegrass Band. They took their name from what most consider Gram's signature song. Also, they're from Waycross, Georgia, a town in which Gram spent his childhood, and which is the locale for the Bobby Bare song "Miller's Cave," which ISB covered on Safe at Home. Unfortunately, there's no video clip available of the group. 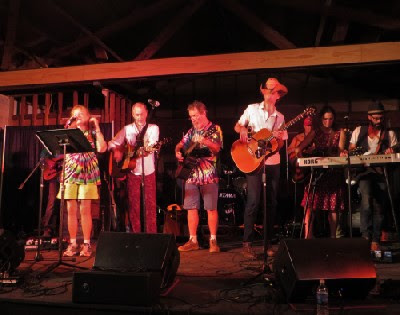 To top off the evening, there was a jam session doing a medley of Gram's songs by various performers, including Toni Brown and Ed Munson, Walter Parks, the Hummingbirds, and members of the Hickory Wind Band.

Thanks to all who put this festival weekend together, including Gene Owen and Anita Strang.
Posted by Claude Scales at 10:16 PM