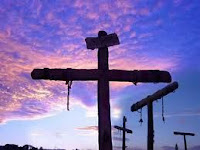 It's late on Easter Sunday. This morning The Reverend Stephen Muncie proclaimed, "Alleluia, Christ is risen!" I, along with the rest of the Grace Church congregation, responded, "He is risen indeed; alleluia!" For now, though, I'm looking back at what has just ended.

Nine years ago and again eight years ago I posted at the beginning of Lent about my state of mind entering that most profound of Christian liturgical seasons. Mostly these were about the doubts I held, both about Christian doctrine and about myself. This past December I posted at the end of Advent, noting that it had seemed more like Lent to me, reflecting as I was on the loss of friends and my own advancing age, and on the disastrous turn I saw our civic discourse taking.

As in Lents before, this year I didn't undertake any traditional "discipline" in the form of giving up something. I thought that by reading the Lenten devotions supplied by Grace Church along with the scripture readings by which they were inspired, and meditating on them I would get somewhere. After two weeks, I gave up on the devotions and scripture. I put this down to the demands of my paying work and of the Brooklyn Heights Blog. The world was too much with me.

I also attended a class, given after church service by our resident seminarian, She guided us in writing a "spiritual memoir". I didn't get far. After our first session, I managed to write this, which gives a clue as to why, besides the distractions of everyday life, I stopped reading the Lenten devotions:


In the Lenten readings, there are several passages the belittle the role or efficacy of human wisdom, e.g. 1 Corinthians 3:19 ("For the wisdom of the world is as foolishness to God" and "The Lord knows the thoughts of the wise, that they are futile.") Is wisdom or intellect futile, or even an impediment, in trying to understand God?

As an extension of the thought above, a thread that runs through much of Christian teaching is paradox. One must lose one's life to gain it, the first shall be last, and, perhaps most fundamentally, the nature of Christ as fully human and fully divine.

The "paradox" part didn't bother me; indeed, I rather liked it. As I acknowledged in an earlier post, I have an attraction to paradox, to the tension between the known and the unknown; between, as Steve Muncie put it, "mastery and mystery." While I prize intellect and knowledge, I also cherish the quotation Steve gave me from the "born-again paradox" Anne Lamott: "“The opposite of faith is not doubt, it’s certainty.”

Email ThisBlogThis!Share to TwitterShare to FacebookShare to Pinterest
Labels: Metaphysics and religion, Self-Absorption