Not far from where I live is a small port for container ships. In an era of larger and larger cargo vessels (although this trend may have reached a limit, at least for now, with Emma Maersk and her planned sisters), little facilities like Red Hook are at some disadvantage, though there are enough smaller ships serving less heavily trafficked routes to provide a market for them. Red Hook has the additional problems of not having a vast expanse of landside storage space and lacking a direct rail connection. Trucks handle many of the containers there, though some are transshipped to barges for delivery to railheads in New Jersey or elsewhere.

Despite these handicaps, much to my delight the little port thrived for a number of years after I moved to Brooklyn. I made it an at least daily routine, weather allowing, to walk across the street and down a short path to the Brooklyn Heights Promenade, from which I could (in addition to seeing the Statue of Liberty, the lower Manhattan skyline, and the Brooklyn Bridge with the Empire State Building and Midtown beyond) check on the activity at Red Hook. I even developed a private superstition: that the Mets were more likely to win if there was a ship docked at Red Hook. One night, I was watching a game in which the Mets had a one run lead going into the seventh. As the visiting team came to bat, I heard three blasts of a ship's horn. I walked outside to see the only vessel that had been docked at Red Hook pulling out into the Buttermilk Channel. When I got back to my TV, the visitors had scored a two run homer that put them ahead for good.

A couple of years ago, I noticed that the likelihood of there being a ship or two docked there when I made one of my Promenade strolls had gotten smaller. At first, I put this down to greater cargo-handling efficiency meaning shorter turn-around times. Then I began seeing hints in the local press that developers were eying this stretch of waterfront for residential development. I noted this in an earlier post; now, it seems confirmed by stories to the effect that the Port Authority, which owns the land and piers that the port uses, is encouraging shipping companies to use other facilities in New Jersey, and is preparing to evict the stevedoring firm that operates the port so as to sell the land at a considerable profit. 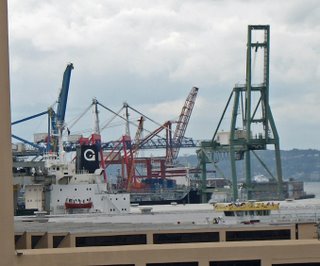 I was delighted, therefore, on one of my Promenade excursions a few days ago to see three ships docked at Red Hook. In the photograph to the left, taken from the Promenade, you can see the superstrucure and funnel of the nearest ship, the forecastle and prow of one docked beyond it, and, above that, the superstructure of a third vessel docked at an angle almost perpendicular to the closer two. 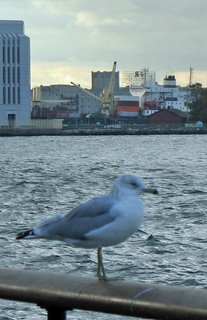 In the photo to the right, you see Red Hook from the vantage of the Battery Park Esplanade, at the southern tip of Manhattan, where the gull is resting on the railing. Beyond the bird is the channel between lower Manhattan and Governor's Island, and beyond it the northern tip of the Island, with the ventilating tower for the Brooklyn-Battery Tunnel to the left. Beyond that is Buttermilk Channel, and on its far side is a container ship docked at Red Hook.

Below is another view from the Brooklyn Heights Promenade. Beyond the cargo vessel, a cruise ship is docked at the new passenger terminal just south of the container port. My consolation prize, should the container port close, is that the cruise ship terminal will remain, and even likely expand. I am no great enthusiast for contemporary cruise ships, with the exception of Queen Mary 2 and a few others, which maintain a modicum of shipshapeness and don't try to disguise themeselves as floating Morris Lapidus hotels, not that I have anything against his hotels, so long as they're on land. 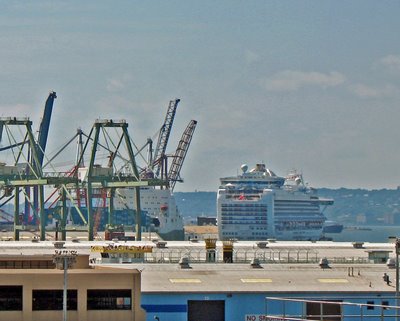 At least my hypothesized connection between Red Hook traffic and the Mets' success has been disproved.

Update: Twiffer gives me a link to H.P. Lovecraft's The Horror at Red Hook, which is set in a lurid version of the neighborhood as it might have been in the early twentieth century. While I'm sure it then had the raffish character common to dockside communities, I doubt it was quite the squalid sinkhole of depravity Lovecraft depicts (and I seriously doubt it was ever likely to become a Little Kurdistan). Warning: Lovecraft's writing is permeated with the casual racism charcteristic of his time. He uses "swarthy" as a virtual synonym for "sinister", refers to "squinting Orientals", and contrasts the "squat" denizens of Red Hook (consisting of "Syrian, Spanish, Italian, and Negro elements impinging upon one another") with the "sturdy Vikings" of a nearby Norwegian neighborhood (remnants of which remain today).

I'm intrigued by the cover illustration on the issue of Weird Tales in which "The Horror" was published. It shows what looks like a giant version of one of the Wicked Witch of the West's flying monkeys swooping down on a cape-clad woman who appears to be making her way on a path through a glacier. If you click on the cover, you get a link to the table of contents; unfortunately, there's no link to to the text of instalment one of John Martin Leahy's serial novel Drome, which this is supposed to illustrate. However, a bit of Google research got me this quote:

The quote comes from this amusing page in an Edgar Rice Burroughs tribute site. According to the author, Drome, along with Burroughs' Pellucidar, Jules Verne's Journey to the Center of the Earth, and many others, exemplifies speculative fiction based on the "hollow earth" theory (now pretty much put paid by plate tectonics) that posited inhabited worlds in vast caverns honeycombing earth's interior.

Mets augury update: Twiffer (scroll down to second comment) may have been right about the efficacy of the augury continuing. Late yesterday afternoon, I was delighted to see three ships docked at Red Hook: a hulking, ungainly Lapidus-hotel style cruise ship; a not-so-hulking but still ungainly National Shipping Company of Saudi Arabia container ship, and a trim little tramp freighter. As game time approached, the cruiser and the Arab departed, but the little tramp remained as the Mets managed to stay alive. I just checked, and she's still there (photo taken at 3:10 PM): 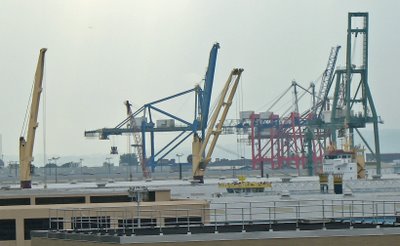 The fate of the Mets' season may rest on her remaining at her berth until tonight's game is over. It's a tough, lonely job. I hope she's up to it.

Case disproved: the ship's still there, but they lost, anyway.

Congrats, Twiff. Now I get to root for the Cards.
Posted by Claude Scales at 9:23 PM