Color guard for a parade that wasn't. 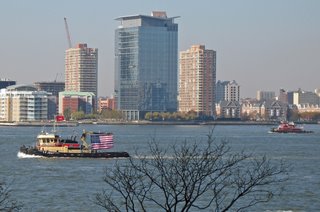 This powerful Army Corps of Engineers tug, flying a plus-sized flag, was meant to lead the WW II veteran aircraft carrier Intrepid as she was towed from her berth on the West Side of Manhattan to Bayonne, New Jersey, where she is to undergo extensive repairs. Unfortunately, despite an unusually high tide in the Hudson estuary this morning, Intrepid's propellors dug into the mud that has built up around her berth over the years, and the move had to be postponed. There will be another attempt in December. (Photo taken from the Irish Hunger Memorial, about which I'll be posting in the near future.)
Posted by Claude Scales at 11:08 PM