Today, I'm proud to be a lawyer. 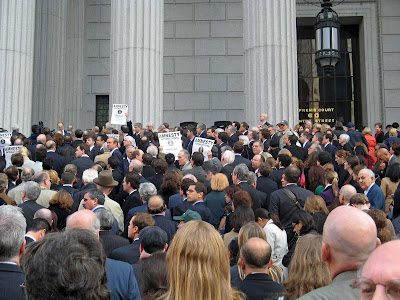 I don't blog much about law. It's not that I find my profession uninteresting (far from it); it's just that I need a forum to express my half-baked opinions on other subjects. Every once in a while, though, something makes me want to get up on a soapbox and yell, "I'm a lawyer and, by God, I'm proud of it!" I had that feeling last week when I saw a photo on the front page of the New York Times showing a roomful of Pakistani lawyers who had gathered to organize a protest against the government's suspension of constitutional rights and protections and the summary sacking of the Supreme Court. Almost all were men, dressed more conservatively than most male New York lawyers, i.e. in dark suits, white shirts and conservative ties. Two were women, in dark skirts, white blouses and with aqua colored shawls draped from their heads. I later learned that these lawyers, along with many judges, had been summarily jailed with no recourse to any authority capable of, or willing to, enforce any notion of due process.

On Thursday I received an e-mail from Barry Kamins, President of the New York City Bar Association, notifying me and all other members that today, Tuesday the 13th, there would be a rally in front of the Supreme Court, New York County courthouse, to show solidarity with Pakistani lawyers. Today I took the subway to lower Manhattan, dressed, as Mr. Kamins urged, in my most conservative duds, to join the protest. Walking the corridor toward the subway exit, I felt a tap on my shoulder, turned, and was delighted to see two colleagues from the firm with which I have an affiliation, also headed to the rally. As we emerged from the station onto Foley Square, I was delighted to see a very large crowd on the courthouse steps (see photo above). 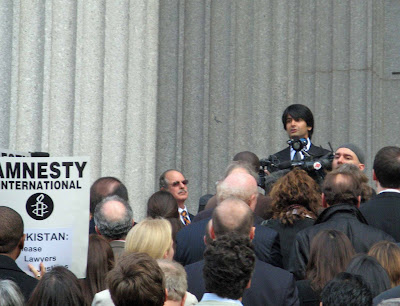 The highlight of the event was a brief talk by Ali Ahsan (see photo above), a Pakistan-born New York lawyer, whose father is president of the Pakistani Supreme Court Bar and has been imprisoned, and whose mother is subject to an arrest warrant. He said he was grateful that his parents' prominence would assure international attention to their cases, and expressed dismay that many others were not so fortunate. He said the turnout for the rally made him proud to be part of the New York legal community, and read an e-mail message from the University of Lahore Law School faculty and students expressing their gratitude for our support. Finally, he noted that the actions of the Pakistani government should not be countenanced as necessary to combat terrorism; indeed, they were more likely to foment it.
Posted by Claude Scales at 8:17 PM

Email ThisBlogThis!Share to TwitterShare to FacebookShare to Pinterest
Labels: Law