The big and the small: Torm Thames and Patrick Sky 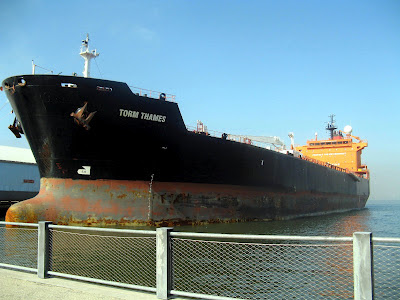 As I earlier noted here, Brooklyn Pier 7, which lies next to Brooklyn Bridge Park's Pier 6, sometimes serves as a temporary berth for ships between charters. For the past week or so, it has hosted a larger than usual vessel, Torm Thames, a Norwegian flagged chemical tanker with an overall length of 604 feet and a cargo capacity of 47,036 deadweight tons. I took the photo above from Pier 6 while on a morning walk the day after Torm Thames arrived. Here is a better view of Torm Thames' superstructure, taken the following, foggy, morning from the Brooklyn Heights Promenade. 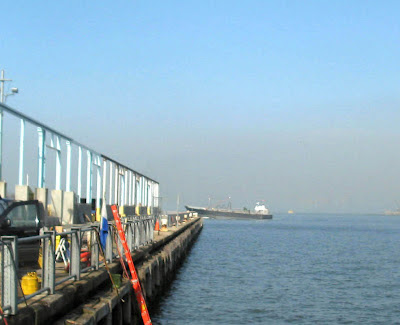 Continuing northward on my walk, as I passed the northern edge of Pier 6, I caught a glimpse (and was able to get a quick shot just as she began to disappear behind the pier) of the small harbor tanker Patrick Sky heading south into the Buttermilk Channel.


Here, thanks to FL92002, is a video of Patrick Sky heading south on the East River after passing under the Queensboro--excuse me, the Edward I. Koch--Bridge (also known as the 59th Street Bridge). There's also a photo of Patrick Sky with a snow-covered main deck, taken after the storm of January, 2011, on Will Van Dorp's Tugster: a Waterblog.

Posted by Claude Scales at 8:27 AM