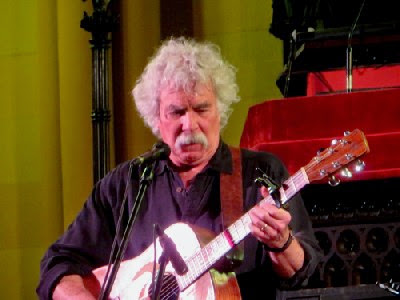 Tom Rush is a singer whose art I've held especially dear. I first heard him in the spring of 1968, on the back half of my first year at Harvard Law, when I discovered WBCN, Boston's first FM rock station. It was, for me, a time of emotional turmoil. I was nearing the end of my first New England winter--I'd been living in Florida since age eight--while dealing with academic demands and with having fallen into a hopeless infatuation with a woman in my class. Joni Mitchell's "Urge for Going" is about autumn fading into winter, and loss of love. I heard Tom's cover of it as winter was beginning to yield to spring, and as I yearned for a love that never was to be. Still, it fit my mood perfectly. This past Saturday, I heard Tom live in concert for the second time--the first was at Greenwich Village's late venue the Bottom Line in 1975--at the First Unitarian Church a few blocks from where I live, in a concert presented by First Acoustics. As if answering my unspoken request, he opened with "Urge for Going":


Tom credits the song's popularity to WBZ. I believe WBCN was their FM radio affiliate.

Another of my favorites Tom sang at the concert was "No Regrets," which he followed with the haunting instrumental "Rockport Sunday." He told how he wrote "No Regrets" and sang it for the first time while visiting Judy Collins, who served tea. When he finished the song, Judy's response was simply to pour another cup. Thus discouraged, Tom didn't release the song for several years. It became his first hit, and has been covered by, among others, the Walker Brothers and U2. Tom said he now realizes Ms. Collins' lack of response was because "she was overcome by emotion."

In the clip above, Tom sings and plays "No Regrets" and "Rockport Sunday" at Club Passim, a nonprofit venue for musical performances and center for the preservation and encouragement of folk music, in Cambridge, Massachusetts. Cambridge is where Tom got his start as a folk singer in his days as a Harvard student and after, in venues like Passim's predecessor, Club 47.


Tom also did a song I hadn't yet heard, "Remember Song," from his latest album, What I Know.  The lyrics made me think of an old joke: a minister says to an elderly parishioner, "Do you ever think of the Hereafter?" The parishioner says, "Sure. I often walk into a room and think, 'What am I here after?'" It happens to me way too many times these days. I also thought of going to a Kingston Trio concert some twenty or so years ago, where Bob Shane, his slate gray pony tail hanging to his waist, looked out at us and said, "God, you all look old."


I was pleasantly surprised by another song Tom did, which is also on What I Know (I hadn't heard the album yet, but it's now on my Christmas list). He covered one of my favorite R&B songs, "Drift Away," originally done by Dobie Gray. Does it cut Dobie's original? No. Still, it has a compelling, older guy perspective.


Tom ended his regular set with another of my old favorites, his song about growing up in New Hampshire, "Merrimack County." This is prefaced, as most of Tom's songs are, by a longish but very funny story.

Called back for an encore, Tom finished with a rousing medley of "Who Do You Love?" and "Hey, Bo Diddley." He did every song I had hoped to hear, and charmed my wife, who had been dubious. When I worried about getting there early to get good seats, she said, "It's not like we're going to a Beatles concert." Afterward, she said, "He's from my neck of the woods."
Posted by Claude Scales at 11:32 PM