We're staying in the magic year 1967 this Thursday. Procol Harum, a band named for a cat, had a huge hit that summer with "A Whiter Shade of Pale", with a J.S. Bach inspired melody by Gary Brooker, played on Hammond organ by Matthew Fisher (Fisher would later successfully sue Brooker for partial credit for the music), and surrealistic lyrics by Keith Reid, listed on their album jackets as a band member with the designation "poet." 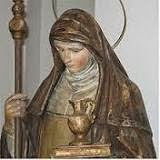 Procol Harum's follow-up to "Whiter" was a song called "Homburg", but for a while WRKO, the Boston AM top forty station I had on my clock radio (yes, sometimes that fall I was awakened by the Strawberry Alarm Clock) was playing an instrumental with the title "Repent Walpurgis." When I first heard a DJ announce it, I thought he said, "Repent While Purchase," which made no sense, even in Procol Harum's psychedelic terms. I learned the true title when I bought the group's eponymous first album, on which it's the final cut. I knew that the eve of May Day is sometimes called "Walpurgis Night," but I wasn't sure who Walpurgis was. It turns out that the event is named for Saint Walpurga, an English born nun who became an abbess in Germany and was later canonized.

Like the melody for "A Whiter Shade of Pale," that of "Repent Walpurgis," composed by Matthew Fisher, is influenced by J.S. Bach (as is Garth Hudson's organ intro to The Band's "Chest Fever"), and also by the French organist and composer Charles-Marie Widor.
Posted by Claude Scales at 11:19 AM