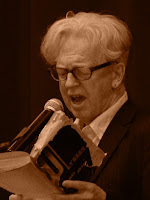 I got to know Larry Kirwan (photo) in 1978 when he and Pierce Turner, as Turner and Kirwan of Wexford, were the house band at the Bells of Hell. The clip below is of their live performance of Larry's song "Livin' in America" at the Hudson Valley Irish Fest in Peekskill, New York. The song is by Black 47, a band Larry put together in 1980 and which I once described, with some poetic license, as "traditional Irish thrash metal hip hop punk," which is to say, I loved it. They disbanded on amicable terms last year. The song is about two Irish (legal) immigrants living in New York in the 1980s, before Ireland's economy took off, luring many back, only to be disappointed after 2008. He (Larry) works in construction; she (Mary Courtney) as a nanny. One of the things I love about this song is that the tune is that of the great Irish rebel song "The Foggy Dew":
:

Tomorrow (St. Patrick's Day), I'll be at B.B. King's to hear Larry and a partial reunion of Black 47, along with David Amram and others. I'm looking forward to a great evening.