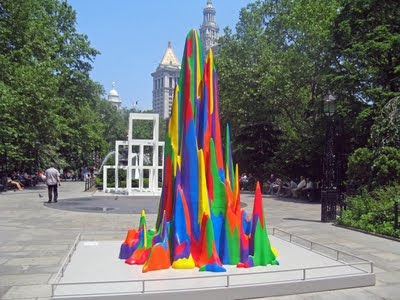 Sol LeWitt (1928-2007) was an influential, though self-effacing, American artist of the past half-century. His work is considered to fall within two artistic traditions that arose in the late twentieth century: conceptualism, which sought to relate art directly to the domain of ideas, or concepts; and minimalism, which stripped art of of any sense of personal expression. His sculptures are the subject of a show in New York's City Hall Park, "Sol LeWitt: Structures, 1965-2006," which will be in place until December 2 of this year. The work that is positioned nearest the main, southern entrance to the park, Splotch 15 (2005) (photo above), is one of his later works, made after he broke from strict minimalism and allowed his art to be more expressive. 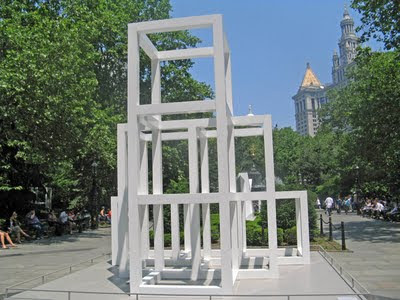 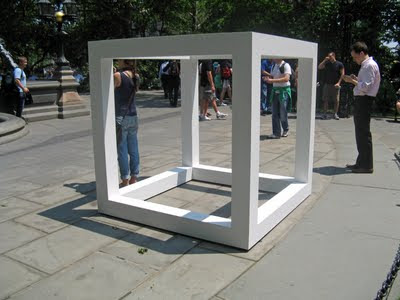 Large Modular Cube (1969) is even more minimalist: a simple cube in outline. 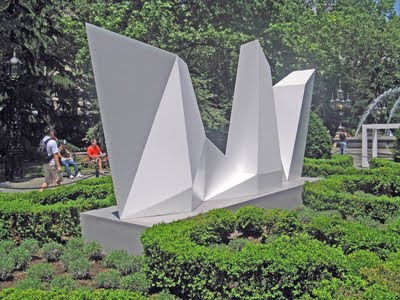 Complex Form 6 (1987): the title says it all. By the late 1980s, LeWitt began creating more visually stimulating works, breaking from the simple geometry of cubes and designing multifaceted, asymmetrical forms. 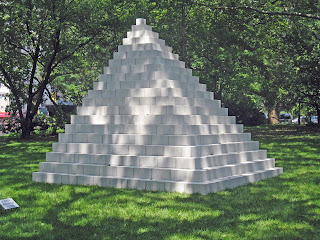 Seeing Pyramid (Münster) (1987) in this light brought to mind Gerard Manley Hopkins' poem Pied Beauty, which begins:
Glory be to God for dappled things-
For skies of couple-colour as a brindled cow... . 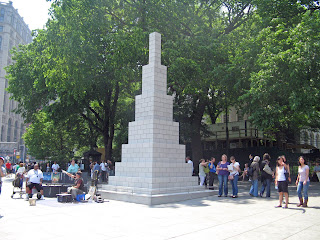 Another of LeWitt's "architectural" works (early in his career, he worked as a graphic designer in the office of I.M. Pei), and the largest in this show, is Tower (Columbus) (1990), which stands outside the park, on the plaza facing the entrance to the Brooklyn Bridge. The structure suggests the "wedding cake" or "ziggurat" style of architecture that characterized New York City skyscrapers before the zoning law was changed to encourage tall, slender buildings set back on plazas instead of bulky buildings with progressive setbacks.
Posted by Claude Scales at 12:25 AM