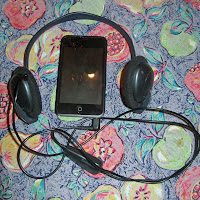 Here I continue the tradition of sharing with my readers the pieces of music randomly selected by my iPod to play during some journey (this having been during a trip from my apartment via foot, subway and bus to the Metropolitan Museum of Art, where my daughter, her friend, and I were treated to a private tour by a former colleague and present friend of my wife, who is an art historian, and expert on Byzantine art).

Jimmy Cliff, You Can Get It If You Really Want. Reggae doesn't get much perkier than this complete self-help book sung in two minutes forty-two seconds flat, from the soundtrack of the magnificent The Harder They Come (1973; see a promotional trailer and hear the title song below):

Johnny Nash, I Can See Clearly Now. The iPod stays in a reggae groove with this song that's so perky that the first time I heard it on the radio, I thought it was Poco. Feeling depressed? Just click on the arrow below:


Gabriel Fauré, Elégie, Jules Eskin, violoncello, Boston Symphony Orchestra, Seiji Ozawa, conducting. The iPod must have sensed that I was in danger of a perkiness OD, so it served up a shot of musical sedative in the form of this lovely piece for cello and orchestra. Below is a clip of cellist Julian Lloyd Weber playing it with just piano accompaniment (unfortunately, the pianist isn't identified; if anyone recognizes him, please let me know):


John Mayall and the Bluesbreakers, with Eric Clapton, It Ain't Right. Can the blues be perky? This rendition of a harp-driven Little Walter song shouts an affirmative response.

This red hot Cajun song isn't as jarring coming after Bach as you might suppose. Indeed, it seems to fit quite nicely. Très perky, aussi.


I know you said he was just a friend,
But I saw you kiss him again and again and again,
Honey, these eyes of mine don't fool me,
Why did he hold you so tenderly?

A fine example of the blues not being perky.

Quick: how many rock groups that had their origins in the 1960s are still alive and performing, with at least one original member? There's the Stones, and one or two others, including these guys. Well, they're all guys, now, but at their inception they had a woman singer, Judy Dyble, who was with them for their first album, from which this steady, driving rocker comes. Before the second album, she left to join another group and was replaced by the lovely, tragic Sandy Denny. Below is a clip of the band's first lineup, doing "Time Will Show the Wiser", also from their premiere album, with Ian McDonald (later known as Ian Matthews) on lead vocal and Judy Dyble, and a very young Richard Thompson, on harmony:


Dirty Dozen Brass Band, Li'l Liza Jane. Classic New Orleans Dixieland brass with vocals, including some nimble scatting, doing a song I used to sing while marching in ROTC camp. This is from the excellent Rhino New Orleans Party Classics CD. Man, you talk about perky.

Willie Nelson, Crazy. Very early Willie, done in the overproduced, deracinated "countrypolitan" style championed by Chet Atkins, but nevertheless his voice and delivery, and a great song that he wrote but was first made a hit by Patsy Cline, triumphed over adversity.

Rolling Stones, Rip This Joint. This is beyond perky; this is frenetic. Again, words would fail doing it justice, so here's a live performance video:


Ritchie Valens, Come On, Let's Go. Valens was a fireball in the rock 'n' roll firmament: signed to his first record contract at the age of seventeen, within a year he had hits off both sides of a disc, "Donna" and "La Bamba" (the latter the first rock hit sung in Spanish), and died before his eighteenth birthday in the plane crash that also ended the lives of Buddy Holly and J.P. "The Big Bopper" Richardson. "Come On, Let's Go" was Ritchie's first record release. It is muy perky.

The Band, Long Black Veil.
Enough of perky for now. I first knew this mournful song from the Kingston Trio (see my commentary on them here), though it was originally recorded by country music legend Lefty Frizell. The Band's version is on their first album, Music From Big Pink, which has a generally lachrymose quality, accentuated by the keening falsetto of Richard Manuel. Here's a video of the song from a live performance, featuring my late sometime Lion's Head and Lone Star Cafe drinking and (on one occasion) singing companion, Rick Danko:


Aretha Franklin, You Make Me Feel Like a Natural Woman.


When my soul was in the lost and found,
You came along to claim it,
I didn't know just what was wrong with me
'Til your kiss helped me name it

The iPod stays in a meditative groove with the Queen of Soul.

The Kingston Trio, Riu Chiu. It's July, so, of course, it's time for a Christmas carol; specifically, a sixteenth century Spanish villancico sung a capella in spine-tingling three-part harmony. I couldn't find a video of the Trio doing this, but here is a rendition by Chanticleer:


W.A. Mozart, The Marriage of Figaro, Overture, Metropolitan Opera Orchestra, James Levine, conducting. So, my journey ends with an overture. And a right perky one, at that.
Posted by Claude Scales at 2:01 PM