The delights of the Fenimore Art Museum: Part 1, Ralph Fasanella and The Florida Highwaymen 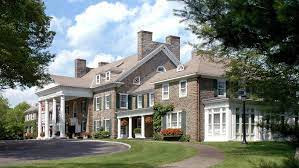 The Fenimore Art Museum is on the outskirts of the Village of Cooperstown, New York, named for William Cooper, who founded it in 1786. The Museum is named for his son, James Fenimore Cooper, a novelist known for his depictions of Indigenous Americans and of frontier life. The Museum's building was originally the mansion, completed in 1933, of Edward Severin Clark, an heir to the Singer Manufacturing Company (best known for sewing machines) fortune. After his death his brother, Stephen Carlton Clark, gave it to the Museum, along with substantial collections of American fine and folk art. The Museum also has a large collection of Indigenous American art.
Upon our arrival at the Museum, Martha and I headed for the exhibition "Drawn from Life: Three Generations of Wyeth Figure Studies". Our visit in 2007 to the Farnsworth Art Museum in Rockland, Maine, and its extensive collection of works by Andrew Wyeth, had made us admirers. Unfortunately, the gallery holding the Wyeth exhibition was crowded, so we turned to the nearest other exhibition. 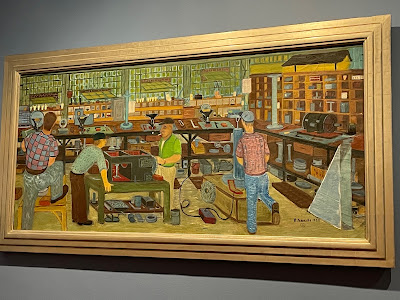 That was "Ralph Fasanella: Americans Unseen". This proved fortuitous. Ralph Fasanella (1914-1997) was born in the Bronx to Italian Immigrant parents. As a boy he helped his father on his ice route. He later worked at various jobs, became a union organizer, and prominent in leftist causes. Martha was already aware of him because of her previous work at the NYU Tamiment Library & Wagner Labor Archives. He was a self taught artist who didn't start painting until 1945, when he was over thirty. His early works were typically scenes of workers in their workplaces, like "Bench Workers (Morey Machine Shop)" (1954) above, in which Fasanella himself is the worker on the right, or crowded outdoor urban scenes, often depicting events like strikes or May Day celebrations. 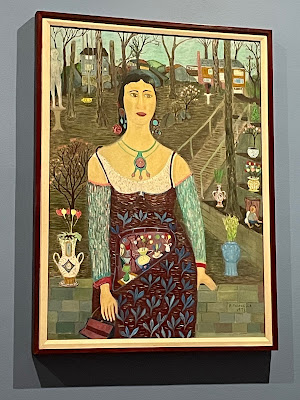 The Fasanella exhibition at the Fenimore, according to the website text,

"explores Fasanella's portrait-making as a vital tool for staying connected with people in an intimate, emotional, personal way, in order to give meaning to their collective actions in society at large."

"Zingarella" (1973) above is, according to the explanatory text accompanying the painting, "an Italian word for a lively and vivacious woman." It is "loosely based on a friend, Virginia Simon, who encouraged Fasanella to draw in the mid 1940s." 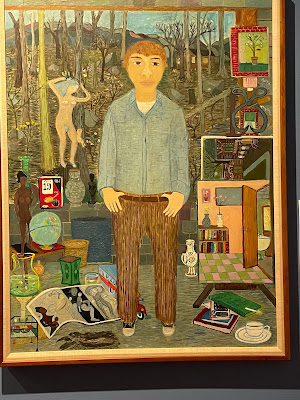 "Marc's World" (1973) "depicts the artist's son, Marcantonio Fasanella, posed as a confident -- and a little cocky -- young man." Note the figure of a striptease dancer in the background, and the magazine on the floor. Marc Fasanella went on to get a PhD in Art and Art Education from New York University and now does consulting work on environmental design through Ecological Design Partners. According to his website linked above, he

"has also written and lectured about his father, a self-taught social realist painter, and wrote the monograph Ralph Fasanella: Images of Optimism which was published by Pomegranate Press in 2017."

Leaving the Fasanella exhibition, I made another fortuitous discovery. On the hallway wall outside was an exhibit concerning The Florida Highwaymen, twenty six Black artists who, according to the explanatory material, "from the early 1950s through the 1980s . . . used vivid and bright colors to capture the beauty of the untouched Florida landscape."  The Highwaymen "were self taught and painted on basic material like Upson board, a material made of compressed wood fiber, and used crown molding for frames." 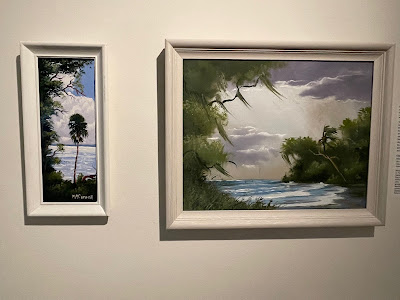 Two Florida Highwaymen paintings were displayed. Both were untitled. The one on the left is by Mary Ann Carroll (1940-2019), the only woman member of the Highwaymen. "The painting depicts a singular palm tree surrounded by lush greenery and the inviting blue waters of the ocean." The one on the right is by Tracy Newton, considered a second generation Highwayman as he is a nephew of Harold Newton (1934-1994), considered a founding member of the group, and a son of Sam Newton (1948-), also considered one of the original twenty six, but who denies that either he or Harold was ever part of the group. "[Tracy's] landscape, done in the same style as his predecessors, depicts the changeable Floridian weather as a storm rolling in on the Atlantic Ocean."

There will be a second part to this account of our visit to the Fenimore, in which will be some Al Hirschfeld caricatures and some American artists' views of Venice.
Posted by Claude Scales at 9:23 PM