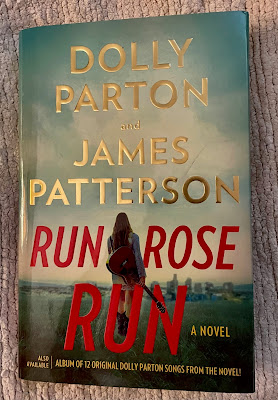 Until a few weeks ago I was one of, I'm sure, a minority of regular American book readers who had never read anything by James Patterson. This isn't because of distaste for his kind of fiction. Until about twenty years ago, I was a fairly frequent reader of "thrillers" and mysteries. What killed that habit was the internet. For one thing I started this blog. Shortly after I did, I became a contributor to, and later editor of, the Brooklyn Heights Blog. Time spent researching and writing cut into time for purely recreational reading.

While I was ignorant of Mr. Patterson's work, other than by reputation, I wasn't of Dolly Parton's. I've been a fan of country music since my childhood, when it was what I heard on the car radio when my parents and I made our annual triangular trip from Florida to visit relatives in central Pennsylvania and southern Indiana. I first knew of Ms. Parton when I read that Jerry Garcia was a great fan. Despite that recommendation, I can't say she's my favorite woman country singer. Her voice seems a little too saccharine. I prefer the harder edged sounds of Emmylou Harris, or Lacy J. Dalton. I love it when Dolly joins Emmylou and Linda Ronstadt on harmony, for example on Rodney Crowell's "Even Cowgirls Get the Blues" from Emmylou's album Blue Kentucky Girl, and later on Neil Young's "After the Gold Rush" on the splendid Trio album the three of them made in 1987.

I have other reasons for liking Ms. Parton. Her philanthropic activities are well known; especially her Imagination Library, which provides free books for children. I give her kudos for purchasing two Baldwin built narrow gauge steam locomotives from Alaska, now named "Klondike Katy" and "Cinderella." that power the Dollywood Express on tours through the Great Smoky Mountain foothills. I've been a train buff since early childhood when, on visits to my grandmother in Tyrone, Pennsylvania, Dad would take me to the station to watch traffic, much then steam powered, on the four track main line of the Pennsylvania Railroad. Trains are also a popular theme in country music.
So, to the book. Friend, it's good. Good; not great. It starts with something improbable. A young woman, AnnieLee Keyes (not her real name, but that isn't revealed until the end), is standing by a Texas highway looking for a ride "East." She gets a ride from the driver of an eighteen wheeler and, when she wakes up and finds him feeling her thigh, pulls a gun from her jacket pocket and forces him to pull over and get out, leaving the keys for her. She thanks her "asshole" stepfather for teaching her how to drive stick, double clutch, and listen to revs. Thanks to this she's able to get going, but what about braking and maneuvering? Sheesh! People take special training to learn how to drive "big rigs."

The next thing we know about AnnieLee, she's arrived at her destination, Nashville, somehow without wrecking, or being arrested for driving, a very large stolen vehicle with a trailer likely loaded with hot merch. Why Nashville? She's a musical prodigy; someone who can spin a song from a moment's thought, and can play guitar.
She finds a dive bar, the Cat's Paw Saloon, that proves to be her cat's paw into the Nashville music scene. She convinces the bartender to let her borrow a guitar and have a turn at the mike, where she thrills the small audience with songs she's written. This catches the attention of a young musician, Ethan Blake, who offers to buy her a drink. She refuses, and walks out as he goes to the stage to do his act. As we might suspect, this is the beginning of a long and tortuous relationship, made difficult by the need both see not to reveal or commit too much, or, in AnnieLee's instance, much of anything.
It's through Ethan that AnnieLee meets Ruthanna Ryder, "one of country music's grandest queens" and also owner of the Cat's Paw. Ruthanna has one intriguing parallel to Ms. Parton: she runs a charity that gives books to needy children. Beyond that, they seem to have little in common. She never wants to sing in public again. When she reluctantly yields to Ethan's insistence that she come to the Cat's Paw to hear AnnieLee, she is surprised and impressed, and lets a gob-smacked AnnieLee know. She adds that, though she doesn't do it often, "I'm going to help you out." Her advice: "Get out of Nashville while you still can."

"It's a hard, tough business  . . .  A tiny thing like you? You'll get chewed up and spit out like a hunk of gristle. Sure, you might taste success, but you're more likely to end up broke and alone."

AnnieLee's response to this includes an F-bomb. Of course, this isn't the end of the adventures these three characters -- AnnieLee, Ethan, and Ruthanna -- will have together, each while dealing with their fears, regrets, and secrets. AnnieLee, with help from Ruthanna and Ethan, will "taste success" in plentiful draughts, while escaping occasional attempts by mysterious men to kidnap her. The last of these will lead to another improbable occurrence: her surviving a four story fall from a hotel balcony.

Improbables aside, this was a book that kept me going; 409 pages in three days. The writing is concise and compelling. As I noted above, I was not familiar with Mr. Patterson's style. It may be best described as a lack of "style." There are no flourishes. He is sparing in his use of adjectives; he does not tell you something is "horrifying"; he describes it and lets you draw the conclusion.

Although I'm convinced Ms. Parton could write a novel by herself -- she has written an autobiography -- stylistic uniformity makes me assume Mr. Patterson did all, or almost all, of the composition of the novel's text. Where does that leave Ms. Parton's claim to co-authorship? We know she wrote the lyrics, quoted in the text, of AnnieLee's songs (all of which, including some not quoted in the novel, can be heard here). Beyond that, I'm sure she contributed considerable knowledge of the Nashville music scene -- on that score I have also to recommend my friend Marshall Chapman's autobiographical Goodbye Little Rock and Roller -- and a description of the level of pain a woman's feet can endure from wearing stiletto heels.

Posted by Claude Scales at 9:45 PM