Jazz and the visual arts. 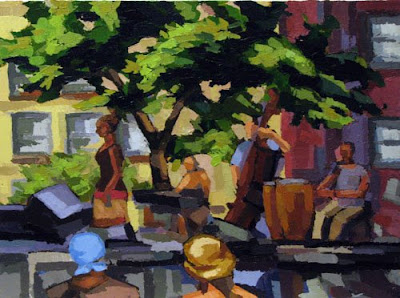 There is a longstanding connection between jazz and the visual arts. It had its beginning in Paris of the 1920s, where, as the description of the Smithsonian exhibition The Jazz Age in Paris: 1914-1940 explains, a number of American musicians, many of who had come to France as part of the U.S Army forces during World War I, decided to sojourn or settle. They found a dynamic cultural environment that welcomed new modes of expression in music, as it did cubism, fauvism and other manifestations of the visual arts avant garde. As many of the jazz musicians took quarters in the Montmarte district where clubs featuring new music were located, they found themselves in proximity to the flats and studios of many painters and sculptors.

Later, in the 1950s and 60s, the same propinquity between jazz and the visual arts was repeated in Greenwich Village, where abstract expressionists like Willem de Kooning and Jackson Pollock rubbed shoulders with John Coltrane and Thelonius Monk. A similar mixing of artists and musicians occurred in San Francisco's North Beach. This proximity sometimes showed in the choice of jazz album cover art; for example, S. Neil Fujita's painting (update: for more on Fujita, who died in October 2010, see here) that adorns Charles Mingus's Mingus Ah Um. 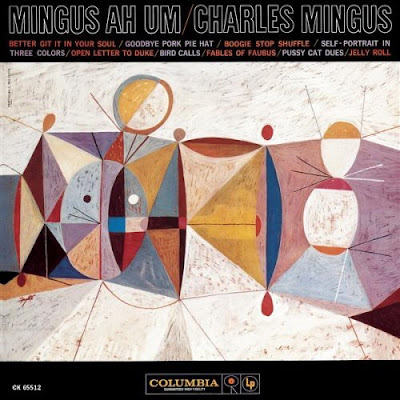 There are apparent parallels between jazz and some varieties of modern painting. Both employ improvisation and depart from earlier rules of formal structure. Some modern paintings display a rhythmic sense akin to jazz's syncopation, a well known example being Broadway Boogie Woogie, by Piet Mondrian, one of the artists who was present in Paris during the 1920s. Perhaps it wouldn't be too much of a stretch to connect non-representational painting (a term I prefer to "abstract" as all art is, of necessity, an abstraction) with scat singing, as demonstrated by Ella Fitzgerald in "One Note Samba":

I was inspired to write this when I attended the opening party for "Jazz and Art/an exhibit celebrating America's musical art form" at the Hudson Guild Gallery, 441 West 26th Street, Manhattan. Included in that exhibit, along with many other works, is the painting Jazz Band at the Park by Michael Sorgatz, an image of which is at the head of this post. The exhibit will be open through June 10, 2009.
Posted by Claude Scales at 11:11 AM