Subway to another galaxy? To the future? To the past? Dr. Michio Kaku says it may be possible.

When I was seven, living in rural Hertfordshire, England, I would take walks in the countryside near our cottage. I had a persistent fantasy that, around some bend in the path or past some hedgerow, I would discover a magic shortcut that would take me immediately to someplace far away where I'd rather be, perhaps the bustling streets and shops of London, or the docks at Southampton where I could see the great ocean liners coming and going. (No, I hadn't read the Narnia books.) According to the clip above, it may be possible to create such shortcuts, called wormholes. While it leaves some questions, like how we get the "negative matter" needed to keep a wormhole open, unanswered, it does make for pleasant speculation.

Particularly fascinating, I think, is the effect of gravity on time, which means that wormhole travel would, of necessity, be time travel. Indeed, as Alex Fillipenko of the University of California at Berkeley says, any travel away from earth's surface is time travel, if only in a micro sense. It's interesting to know that, if a correction wasn't made for the difference in the rate of time passage between the satellite that transmits positioning information and your GPS device on the surface, using that device to guide a trip from L.A. to New York would result in your ending up somewhere in Massachusetts. 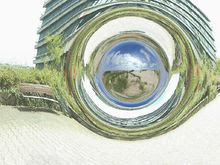 Thanks to FB friend Georgene Z. Russell for the above


[i]mage of a traversable wormhole which connects the place in front of the physical institutes of Tübingen university with the sand dunes near Boulogne sur Mer in the north of France. The image is calculated with 4D raytracing in a Morris-Thorne wormhole metric, but the gravitational effects on the wavelength of light have not been simulated.

Email ThisBlogThis!Share to TwitterShare to FacebookShare to Pinterest
Labels: Physics