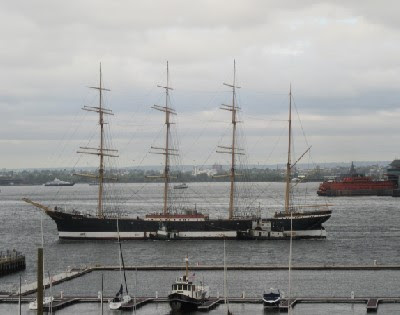 As I noted here last year, the barque Peking, launched in Hamburg, Germany in 1911, will return to her birthplace and original home port, where she will be the centerpiece of a new maritime museum. She was taken in tow by two tugs Wednesday morning and left her berth at Pier 16 of the South Street Seaport Museum for an initial short voyage to the Caddell Dry Dock on Staten Island. She'll spend the winter there, then in spring will be carried across the Atlantic to Hamburg on a semi-submersible heavy lift ship.

Peking's place at Pier 16, and as centerpiece of South Street's historic ship collection, will be taken by Wavertree, which returns to South Street on September 24 following extensive restoration and maintenance work.

I took the photo above as Peking glided past the Brooklyn Bridge Park Marina on Wednesday morning.
Posted by Claude Scales at 5:30 PM