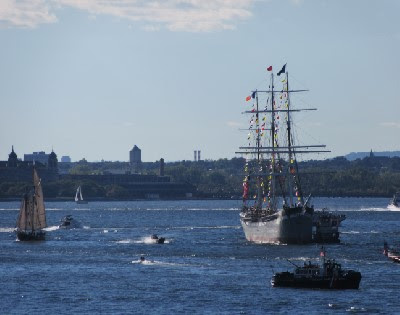 In my last post I bade farewell to the bark Peking, which had been a feature of the South Street Seaport Museum for over forty years, and which is to be returned to her original home port, Hamburg, Germany, to serve as the centerpiece of a maritime museum there. For the first time in decades lower Manhattan's East River waterfront was devoid of any tall ship. This wasn't to last long, though. On the morning of Saturday, September 24 I saw Wavertree being towed across the harbor (photo above) to her berth at South Street, which she had left some time before to undergo extensive renovation and restoration work at a shipyard on Staten Island.

Seven years before South Street acquired Peking, it bought Wavertree, a wrought iron hulled bark built in England in 1885 that lost her topmasts in a gale while rounding Cape Horn in 1912. She then spent many years as a floating warehouse in Punta Arenas, Chile and later as a sand barge in the harbor of Buenos Aires. When she was brought to South Street her hull was sound, but her topmasts and spars were still missing, and she required extensive work to be put into condition for public touring. The Museum made her restoration a long term project, then acquired Peking which, having served as a floating school after being retired from trading, arrived in almost turnkey condition. For over forty years Peking was the centerpiece of South Street's ship collection, while Wavertree sat forlornly at a neighboring pier, off limits to all but museum workers, and still missing her topmasts and spars.

South Street's galleries, shops, and other facilities on land suffered extensive damage from Hurricane Sandy, which in turn caused complete loss of revenue from admissions and sales for a long period of time. Although the museum was able, with government assistance, to repair the physical damage, the financial damage, partially ameliorated by private contributions, remained. Because of her size, Peking is a very expensive ship to maintain. Consequently, South Street entered into discussions concerning Peking's disposition, hoping to find a new owner that would maintain her as a public museum piece. Fortunately, the German government was able to fund her return to Hamburg, and South Street was able to fund the restoration of Wavertree. 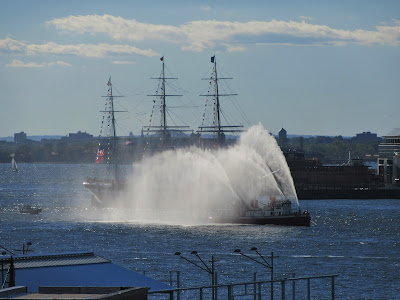 As Wavertree approached South Street, she was greeted by the retired fireboat John J. Harvey, now privately owned. For my earlier encounter with Harvey see here. 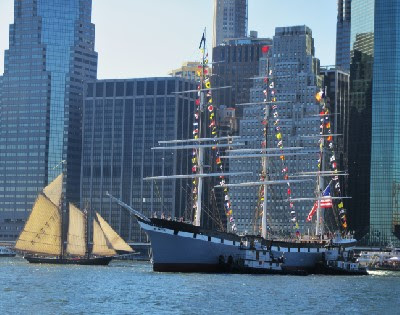 Tugs turned Wavertree, preparing to guide her to her berth at South Street's Pier 16, recently vacated by Peking. At the left in the photo is the Gloucester fishing schooner Lettie G. Howard, part of South Street's ship collection but also used as a sail training vessel by the New York Harbor School. 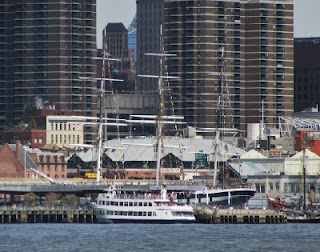 Here's Wavertree, two days later, secure at her berth. Her masts aren't as tall as those of Peking, but she's more representative of the ships that docked along South Street in the late nineteenth and early twentieth centuries. I'm glad to have her there.
Posted by Claude Scales at 7:21 PM