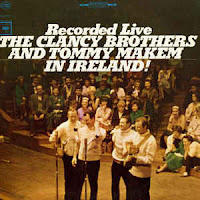 James Joyce's Finnegan's Wake, reckoned one of the most difficult books to read, took its title and a tiny bit of its narrtive from an Irish comic ballad, author unknown, first heard in the 1850s. It tells the story of a bricklayer who, having had "a drop of the craythur" before work, falls from his ladder and dies. At his wake, "a row and a ruction" starts, until whiskey spills on his corpse. This revives him.

I heard the song first as "New Finnegans Wake" on a now out of print Clancy Brothers and Tommy Makem vinyl album "Recorded Live in Ireland." What was "new" about it was Liam Clancy's announcement that, to introduce the song, his brother Tom would read the entire Joyce novel. Tom then read these connected excerpts from the first few pages:

Here are the Clancys doing the song, with the introduction: