The first Christmas I can remember--I think I was three--was when I was given a Lionel train set. It's still at my parents' house in Tampa, packed away. My daughter, now eighteen, wants it someday. She'll get it.

Every year the Transit Museum's Gallery Annex and Store at Grand Central Terminal has an elaborate Lionel layout on display during the holiday season. The clip above, which I made this past Thursday, shows this year's version. It features a mock downtown Manhattan, complete with Brooklyn Bridge, as well as some rural, mountainous territory. 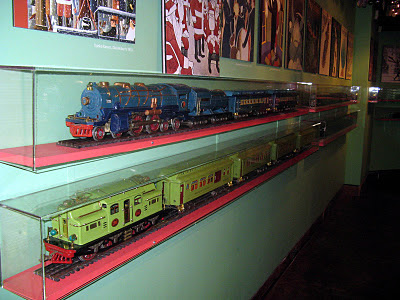 There are also static displays of historic Lionel trains along the walls of the gallery. The steam (top) and electric (bottom) trains shown in the photo above probably were made in the 1920s or '30s.
Posted by Claude Scales at 1:06 PM