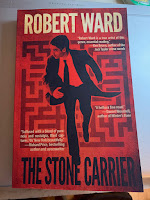 Robert Ward's The Stone Carrier is a book that will grab you and not let you go. I read it because the author and I hung out at the same Greenwich Village bars during the late 1970s, and reviews promised that the novel captured the zeitgeist of New York City at that time. I can vouch for its accuracy about the downtown scene, which was my milieu. (One small quibble: I never knew the Bells of Hell to smell of "moldy bread and dog piss." I took my parents there once. If it had, my mother would have taken one step in, wrinkled her nose, and demanded that we leave.) Two beloved Lion's Head staffers, bartender Tommy and waitress Sha, get fond remembrances; Sha even plays a small part in the action, and there is plenty of that.

Much of that action, including a climactic scene that unfolds over the novel's last few chapters, happens at Elaine's, a bar and restaurant on Second Avenue near 88th Street, that was the favored hangout of New York's glitterati. I never entered Elaine's, though when I arrived late for a party given by my former roommate and his wife, who lived near there, I said I had been walking past Elaine's, looked in, saw Oscar de la Renta and Francoise de Langlade (then New York's top power couple) beckoning to me, and had to join them for a drink. My friends believed me, or more likely pretended to.

Terry Brennan, the central character in The Stone Carrier, is known at Elaine's, and at Studio 54, the disco that drew many of the Elaine's crowd and where more of the novel's action happens. His admission ticket to these places was an article he wrote for Rolling Stone about Thaddeus Bryant, whose first novel, The Debt, was a great success and is being made into a movie. In evident gratitude, Thaddeus introduces Terry to Elaine's and to some of the celebrities he's met there, including Norman Mailer. Terry tells Mailer it was reading his work that inspired him to become a writer. Mailer says, "if that's the truth, then you better be good. 'Cause I don't want to inspire any hacks."

The Stone Carrier (the cryptic title is explained in chapter 32) begins, not at Elaine's, but with a double murder in Central Park at two a.m. The victims are Joey Gardello and his brother Ray. Joey is a boyhood friend of Thaddeus and struggling to make it as a filmmaker. Like he has for Terry, Thaddeus brings Joey into the charmed circle of Elaine's. The murder sets in motion a series of events that lead to Terry's being pursued by both the NYPD and by henchmen of Nicky Baines, a thinly disguised version of Nicky Barnes, the drug kingpin of Harlem. While the plot elicits many surprises, it never strains the reader's - or at least this reader's - willingness to believe. My reaction to plot developments was often "Wow!" but never "WTF?"

Like many, if not most, stories set in New York City, the central theme of The Stone Carrier is ambition; of how small missteps, like allowing a friend to deal coke from your apartment, can threaten it; but mostly about how it can keep you from questioning things that seem to be too good to be true, because they may be.

It's a terrific read.

Posted by Claude Scales at 3:55 PM